A new wave in bar design 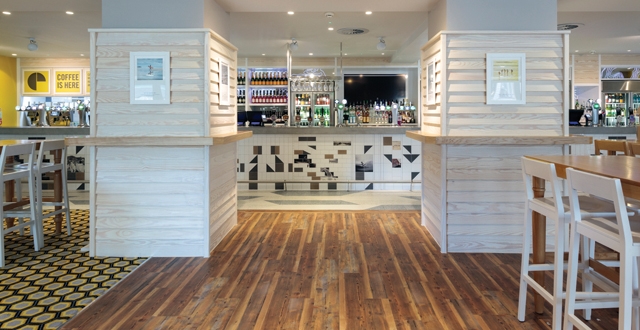 Absolute, the architectural and interiors agency based in Cornwall was recently tasked with creating a new surf bar in British surfer’s paradise, Newquay.

The design firm called upon the UK’s top surf magazine editors to come together in a collaboration that has delivered a 6,000 sq ft surf-inspired bar and club, adding a significant new dash to Cornwall’s style scene.

The radical design departure for bar owners JD Wetherspoon, has seen Absolute reworking the space to create a homage to the town’s most
challenging wave, The Cribbar. All potential clichés have been avoided and the designers have opted for a Surf-infused scheme that utilises bespoke swell chart motifs across a range of hard surfaces and bright, acid inspired fabrics and low level furniture and lighting curated to reflect the 1960s, the era when  the sport first arrived in the UK.

Helen Blake, Absolute’s Creative Director, and her team called in a range of local and UK based designers and makers to help craft their vision into reality.  The founders and directors at Cornwall-based MARK are both surfers so it is fitting that their ‘Shaper Coffee Table’, made from the same resin as heavy duty surfboards sits in the front windows of the establishment.  MARK’s ‘Net Stool’ is also inspired by the sea and hanging fishing nets and is used in blue and yellow throughout the bar and on the outside deck.  Absolute’s very own shop fitters crafted huge metallic gold ceiling ‘volcanoes’ from GRP plaster in their factory in Penryn and the shape and light shafts were designed to echo the feeling of being at the bottom of the sea.

At some 16 feet, The Cribbar’s bar rivals that at St Pancreas Station however this one is made from solid cast concrete with bright yellow swell arrows and matching Chesterfield-inspired concrete sofas were commissioned from Grey Concrete to sit outside the bar.  Massive 2m bespoke geometric yellow external planters have come from IOTA and ‘pop’ coloured urinals have been made by Philip Watts Design. A Cribbar brand motif has been specially etched throughout in glass and on wood and street inspired graffiti by the Cornish boys at Ceri Pashley Designs is found in the toilets.  Globally renowned artist SOMA has also provided a range of prints which are to be discovered across the property and Oakwood, Cardiff have provided sea-side style bleached wood panelling throughout the bar.

One of the most significant elements of the project has been the input from the publishers of the leading surf magazines Carve and Surfgirl as well as the acclaimed British historical book ‘The Surfing Tribe.’  The editorial team advised Absolute on what they thought would work for the local market and artwork using the images from the book have been screen printed into the white tiles that front the bar and a specially chosen range of prints are framed around the property.  In addition, ‘Sex Wax’ motifs are to be found throughout, phrases such as ‘you should have been here yesterday’ etched into a solid concrete wall are peppered around and tactile materials and over stitching have been used to reflect wetsuits and post-surf warm-up blankets.

Knowing the needs of local surfers, Absolute have had a specially installed screen and technology mounted behind the bar so that customers can watch live key contests and surf videos with a local beer in their hand. As well as checking out the current swell charts.

Absolute Interior’s Creative Director Helen Blake commented, “One might be forgiven for thinking that a Cornish surf bar only needs some surfboards on the wall and pictures of bronzed dudes scattered everywhere to capture the essence of this historic culture – but you’d be wrong. Surfers and the surfing culture is based on the idea of creativity and spontaneity with a little dash of anti-establishment thrown in for good measure, hence our approach and results.”