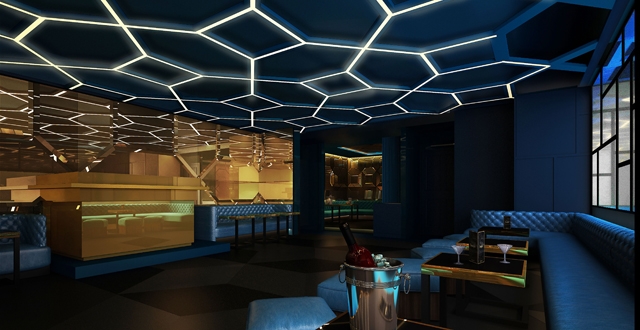 The wooden library style club reception area is encased with decorative timber panel walls, which are complemented by soft lighting. The design team at Blacksheep has created a bespoke wall covering made from wooden cut out graphic lettering of different sizes, fused together, creating a mix of alphabet symbols.

Stained deep blue timber paneling on the walls and ceiling lead into the lounge and bar area, creating a deeply relaxing environment for early afternoons and stylish setting for late evenings. The Georgian pattern featured ceiling further implements the British heritage into the club, modernised with LED lighting inserted in the paneling, which disperses a light neon glow.

The graphic design of a union jack subtly glows out from a gold smoked mirror set within the bar, paying homage to the club’s country of origin. The glowing backdrop of the bar also displays a variety of indulgent ingredients used to create Boujis’ famous cocktails. Deep luxurious turquoise banquette seating lines the edges of the room, adding to the glamourous and sophisticated interior.

Opening Friday the 19th of October 2012, Boujis Hong Kong’s opening coincides with, and celebrates, the 10th anniversary of Boujis London – the club of choice for London’s influential, royal and glamorous crowd.

Boujis, an exclusive members only club located on Pottinger Street, will showcase the best of the West with the best of the East to present a club of the finest blend of drinks, entertainment and service with a decadent line up of events for its members. The Hong Kong launch of the club will present Boujis London’s prominent resident DJ Sam Young.