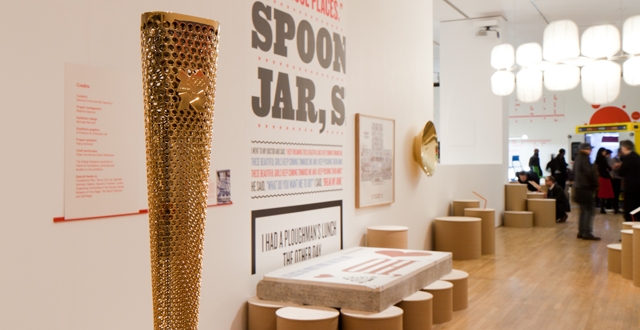 The Design Museum has the UK’s only collection devoted exclusively to contemporary design and architecture. This new collection display reveals intriguing insights found in these exceptional as well as everyday items. In January 2013, six design stories will be presented in the exhibition, offering a diverse look at design: National Identity, Plastics, Modernism, An Archetype – The Anglepoise Lamp, A Designer in the Spotlight and Style Through The Decades. National Identity looks at the objects that define a nation such as the phone box, road signage, the post box, the London 2012 logo and a Euro coin. The dominance of plastic in our lives is examined with examples of luxury through to everyday plastics from the last 75 years. Modernism in Britain provides a snapshot of a remarkable and dynamic period of design, shown through furniture, products, textiles and architecture, alongside contextual images and documents.

The designer Jasper Morrison, whose Handlebar Table is a recent acquisition to the collection will also go on display for the first time. And style is shown through a collection of fashion from the 70s to the 90s and charts the shift of the shopper from Carnaby Street to Kings Road to Bond Street. Rich, thought provoking and surprising, let the museum’s collection tell you extraordinary stories about ordinary things.

The six design stories are as follows:

UmK presents multiple perspectives on a fictional future for the United Kingdom, as imagined by designers and educators Dunne & Raby. The exhibition sees England devolved into four self-contained counties, each free to experiment with governance, economy and lifestyle. These ‘live laboratories’ interrogate the cultural and ethical impact of existing and new technologies and how they alter the way we live.

Anthony Dunne and Fiona Raby use elements of industrial design, architecture, politics, science and sociology to provoke debate around the power and potential of design. UmK challenges assumptions about how products and services are made and used, through reinterpretations of the car and other transport systems.

‘The Oscars of the design world’. The Design Museum’s Designs of the Year awards showcase the most innovative and imaginative designs from around the world, spanning seven categories: Architecture, Digital, Fashion, Furniture, Graphics, Transport and Product. A high profile judging panel will decide the best entries in each of the seven categories and one overall winner. Category award winners and the overall winner will be decided by a jury on 25 March to be announced to the public on 17 April 2013.

London 2012 Olympic Torch designers Edward Barber and Jay Osgerby present an unconventional view on the production of everyday objects. The exhibition will explore the aesthetic of the unfinished, from a trumpet bell to a tennis balls and a Ł2 coin, as well as pieces from BarberOsgerby’s portfolio.

The designers’ multidisciplinary practice challenges the boundaries of industrial design, architecture and art. Working with manufacturers, engineers and factories is integral to the development of the studio’s award-winning projects. This intimate relationship with the making process influences and inspires their work, enabling an explorative approach to materials. Presenting objects that have been intercepted mid-manufacture the exhibition seeks to give an insight into the ‘mystery’ of modern production.

This exhibition, presented in association with the Technology Strategy Board, explores our changing relationship with the designed world. The exhibition will look at what drives innovation and new manufacturing techniques that can increase growth and productivity. The exhibition presents today’s emerging technologies that will become the growth sectors of tomorrow.

The Design Museum continues to support the next generation of designers and creatives with its Designers in Residence programme. This exhibition showcases the work of young designers at the beginning of their careers: recent alumni include Giles Miller, Asif Khan and Bethan Laura Wood. The programme includes a series of events and talks, offering the designers the opportunity to interact and engage with the public, whilst using this platform as a test-bed for ideas, designs and innovations. In a career spanning over forty years, Paul Smith has become one of Britain’s foremost designers. The Paul Smith brand is known for an unmistakable classic Englishness augmented with a colourful ‘twist’. It now includes fourteen different collections for men and women, with shops in sixty-six countries across the world. Paul Smith remains fully involved in all aspects of the business from designing the clothes to choosing the fabrics and approving the shop locations and design.

This Design Museum exhibition explores how Paul Smith’s unique and intuitive take on design, coupled with an understanding of the importance between designer and retailer, have laid the foundations for the company’s lasting success. The exhibition charts the company’s development from Paul’s first shop in Nottingham, measuring just three by three metres, to its now global scale with shops in London, Paris, Milan, New York, San Francisco, Los Angeles, Antwerp, Hong Kong, Singapore, Taiwan, Korea, U.A.E. – and over 200 throughout Japan.

The exhibition is presented through the different stages of design and production behind a catwalk collection, offering great insight into Paul Smith’s design and marketing process. Visitors will gain a key insight in to Paul’s passions, his attention to detail and a detailed look at a year in his life. It will also focus on the unique energy and vision of Paul Smith himself. What drives him as a designer and the significant items, people and places that have inspired him during his career. A section will also be dedicated to Paul Smith’s shop designs, from a shocking pink building with movie set styling on Melrose Avenue, LA, to a Japanese garden at the heart of the Jingumae store in Tokyo.