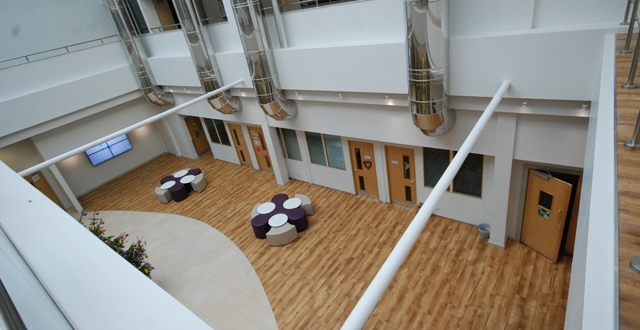 In 2012 Kidderminster College approached architectural and interior designers McAndrew Watts to transform the entrance area of the building into an inspirational learning space for students. The design brief that McAndrew Watts received from the college was a no holds barred brief to transform the environment for students.

The ideas for the redesign were quite radical. The building was effectively a courtyard around an external space with a tensile fabric structure filling the space at the upper levels. The central core on the ground floor consisted of the reception with a flat solid roof and there was no focal point to the building as a whole. McAndrew Watts decided that this needed to be taken out to open up the whole area. They raised the roof so every window would look onto the space and replaced the solid roof with a glazed structure. This transformed the whole building enabling natural light to spill down through the centre of the building, penetrating the corridors that run around the area. To maximise the effect of the natural lighting, the finish was kept to a blank neutral canvas to play on this.

One of the biggest challenges that McAndrew Watts faced when embarking on the remodel was Kidderminster College’s past architectural experiences.  Previous projects had overrun, and costs had been allowed to spiral.

Another issue that McAndrew Watts faced was when they started to cut out the existing roof. As soon as the contractor started the process they discovered that the thickness of the existing roof was greater than indicated in the record drawings from the original architect. The weight and the quantity of material that had to be taken down increased significantly. This had a major impact on the project as McAndrew Watts had to redesign the method in which the slab was taken out of the building and the support to hold it together whilst it was being removed.

Reflecting back on the project, Ian Watts, Principle Designer at McAndrew Watts Architecture and Interior Design Consultants commented “The feedback we’ve received on our work is overwhelming. Students and teachers alike feel that the atmosphere is a lot more relaxed and have more enthusiasm for the building as a whole, not just the reception area. We’re looking forward to continuing our partnership with Kidderminster College and are already involved in developing design concepts for the next phase of work.”