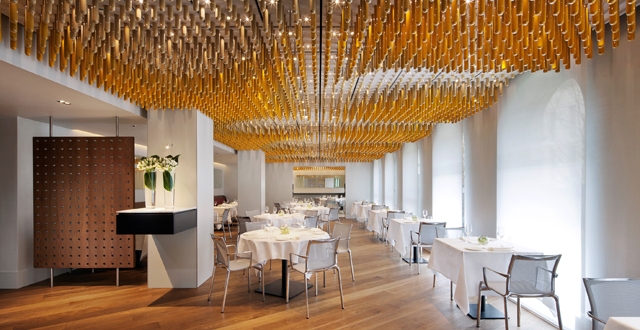 The Halkin by COMO has teamed up with London-based Ab Rogers Design to create the interior for Ametsa with Arzak Instruction. Ab Rogers, known for his colourful and energetic design style, took inspiration from the raw design at the original Arzak in San Sebastian and the tranquillity of The Halkin to create a culinary oasis that refers to the earthy flavours and techniques used in the chefs’ unique cooking style.

The focal point of the restaurant is a wave-like ceiling, created from seven thousand delicate glass receptacles filled with vibrantly coloured spices that are a strong presence in Arzak’s cooking. Part sculpture part chandelier, it forms a warm glittering canopy. A series of mirrors along one wall are also engraved with illustrations of the spices encased in the glass-receptacles.

Large perforated doors partially screen the restaurant from the entrance lobby, the perforations pick up the grid of the ceiling, while an oak floor laid at a 30 degree angle invites diners into the space and lacquered walls create a calm interior where the food will always be the star.

A Private Dining Room can both merge with or be completely separated from the main restaurant with sliding mirrored doors. The Ametsa dining area will accommodate 40-44 covers and the capacity for private dining is 30 (depending on layout). When combined, the space will seat 70.

Ametsa will be a unique collaboration between The Halkin and  a team  consisting of Juan Mari Arzak, Elena Arzak, Mikel Sorazu, Igor Zalakain and Xabier Gutierrez.  Ametsa will be the first international outpost for the three Michelin-starred father and daughter team, whose restaurant in Spain is ranked eighth in the World’s 50 Best Restaurants awards sponsored by S.Pellegrino and Acqua Panna.

The interiors will bring together the Basque heritage that lies at the heart of the Arzak cuisine and the contemporary design of COMO, which seamlessly fits with the setting in stylish Belgravia.