A return to Victoriana 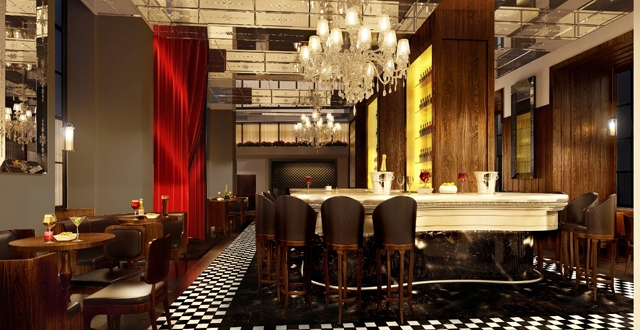 The hotel occupies a prime position between King’s Cross Station and St Pancras International, the busiest rail transport hub in Europe and is a privately owned Grade II listed building.

Originally designed by architect Lewis Cubitt, the Great Northern Hotel opened in 1854 as the first of the new generation of Victorian railway hotels. Reflecting its architectural heritage, the 91-bedroom hotel has been sensitively refurbished and its interior design exudes a timeless elegance with a hint of modernity. The intention has been to evoke the romance of rail travel from a bygone age and to preserve a sense of history and style. David Archer and Julie Ann Humphryes, co-founders of Archer Humphryes Architects (Hakkasan, Sans Souci Hotel Vienna), were commissioned to execute the concept and interior design of the hotel.

The hotel houses a destination restaurant and a glamorous bar. The 90-cover restaurant, Plum + Spilt Milk, is destined to become a neighbourhood dining room with views overlooking London’s newest public square, the King’s Cross piazza, and St Pancras International. Set in an elegant yet informal space, it has been created for people to meet, eat, work and socialise. Daylight streams into the stunning dining room through 17, three-metre floor to ceiling sash windows. A total of 120 hand blown pendant lights create an ethereal atmosphere and the handmade furniture adds an air of understated sophistication.

The GNH Bar takes up almost the entire ground floor and opens directly into the new western concourse of King’s Cross Station and onto Pancras Road. The decadent interior features striking glass chandeliers, a central polished pewter island bar, mirrored glass ceilings inspired by French railway restaurants and a small private mezzanine lounge overlooking the bar. It will be open from early morning until late at night with soulful music and guest DJ’s. The GNH Bar has been designed with the ambition to create one of the most glamorous bars in a major railway station in Europe.