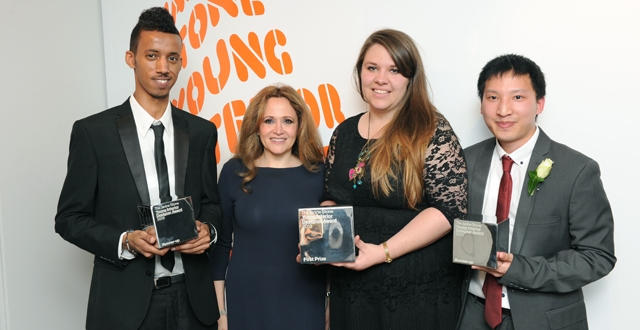 Helene Forrester Wood eHHH is a Final Year design student at The Cantebury School of Architecture. Her winning entry showcased an extraordinary and interllectual visual interpretation of the subject and Brief. The energy and dynamism and clever nod to marketing the project shone through and she demonstrated a thorough understanding of her challenge.

Helen said of the accolade, “I am overjoyed to have won this fantastic competition. I am so excited to be working with Janine Stone and her design team, it will be a wonderful opportunity for me and I shall grab it with both hands”.

The winner receives a Ł10,000 cash prize from Janine Stone and a six-month paid internship at the London studios of the company and the coveted first prize pewter cube trophy. Helene’s university will also receive Ł1,000 of funds for books and equipment for the benefit of future students. The two runners up receive Ł1,000 cash prize each and both will receive a coveted pewter trophy.

The competition was judged by an esteemed panel of experts drawn from the worlds of design, fashion, photography, education and business. Led by Janine Stone, the panel included the renowned photographer and portraitist, Terry O’Neill; the British fashion designer to A-list Hollywood, Alessandra Rich; the Prima Ballerina and Royal Opera House star, Leanne Benjamin; On-line publishing entrepreneur, Raoul Tawadey; Graeme Brooker, Director of academic group, Interior Educators and Lecturer at Middlesex University and the President of The Society of British Interior Design (SBID).

The Runners-up include: Abdi Ali from The University of Westminster and Michael Lau from Canerbury School of Architecture.

The judges were very impressed by the work of all twelve finalists drawn from some of the UK’s leading universities.