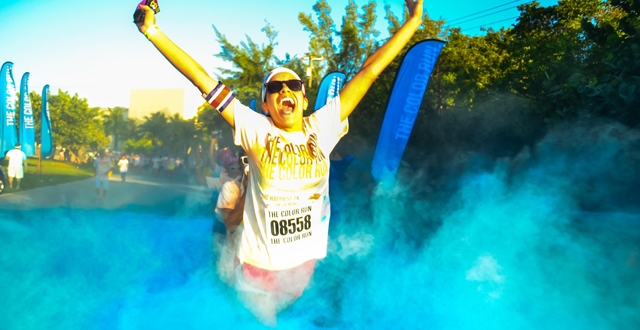 As part of its global mission to add colour to people’s lives, Dulux has announced its UK presenting sponsorship of The Color Run, the world’s happiest and most colourful 5km run. This year, The Color Run presented by Dulux will bring together tens of thousands of people at four events across the UK and see them transformed as multi-colour powder is thrown into the air en route. The resulting spectacle is the ultimate celebration of colour, highlighted by the joy on the faces of all involved and demonstrating the positive impact that colour can have on people both physically and emotionally; a core value of the Dulux brand.

Debuting in London (and for the first time in the UK) on the 14 July, the run will then head to Manchester on 21 July, Belfast on 24 August and finish up at Brighton on 14 September. Now the single largest event series in the US, The Color Run has been colouring the US, Canada and Australia since its launch event in January of 2012 and will grow from over 50 events and 600,000 participants in 2012, to over 100 events and over a million participants in 2013.

Runners of all shapes, sizes and speeds start the run wearing white clothing that is a blank canvas for the kaleidoscope of colours they encounter around the course. At each kilometre a different colour powder is thrown in the air with the runners becoming a constantly evolving artwork. At the end of the course runners are greeted by the Colour Festival where the air is filled with music and stunning coloured powder bursts creating a vibrant party atmosphere.

Jenny Hall, Dulux Marketing Controller, said: “We feel passionately about the positive impact colour can have on us and the places in which we live. Being the title sponsor for the first UK Colour Run is another way for us to bring our mission of ‘adding colour to people’s lives’ to life, as the ultimate celebration of just how uplifting colour can be.”

IMG Challenger World Managing Director James Robinson said, ““We are proud to have the support of an iconic brand like Dulux for The Color Run event series across the UK. The ethos of The Color Run is happiness, health and well being, and we feel that this is perfectly encompassed by Dulux and their Let’s Colour activity.”

As part of the wider sponsorship of The Color Run, Dulux will have a heavy brand presence with various on-ground activities taking place including a Dulux Colour Dome where successful race finishers can have a ‘mid air’ photo taken whilst jumping on a trampette, which will be posted to social media immediately afterwards. Those taking part in the London event will also have the chance to have their photo taken with the Dulux Dog before he officially starts the run.

Sponsorship of The Color Run falls in line with an ongoing marketing campaign from Dulux which focuses on the benefits that colour can bring to a space and the people within that space, communicated through advertising, digital, social and PR channels. The brand believes that there is more to colour than something which is just visually pleasing; it emotionally uplifts people in a positive way.

The importance of colour to the brand is signified by the rallying call ‘Let’s Colour’ which can be seen throughout all communications and is now part of the Dulux brand identity. Specifically, The Dulux Let’s Colour Project is an ongoing global initiative which directly aims to demonstrate the benefits of colour to people, by transforming dull, grey and worn community spaces into an area full of colour – bringing joy and unity to communities and with an ambition of colouring one millions people’s lives by 2020.