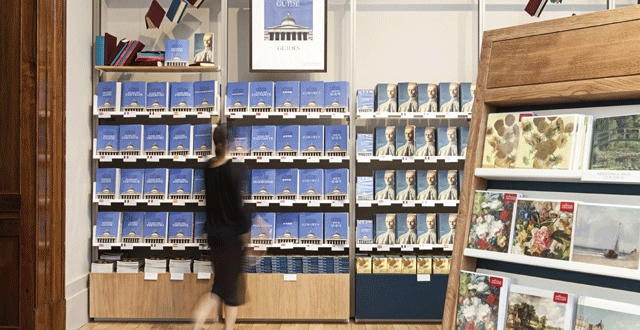 EDGE has re-designed the Portico shop on level 2 of the National Gallery, responding to a brief to find ways to increase turnover from the existing store footprint of 193 sq m. The new concept, developed by EDGE, will see product densities reduced, with a new product mix presented to customers in more comprehensible and dynamic product groupings, set within an overall environment which aspires to be a ‘best-in-class’ retail offer that engages with and inspires customers – in much the same way as the Gallery’s own art collections.
“The design process began by establishing a clear picture of the shop’s core target customer groups”, commented EDGE Director Michael Fern. “Once that was ascertained, we began to draw up retail categories and design language that directly addressed each customer segment, ranging from tourists and day-trippers from the Greater London and home counties areas to dedicated cultural tourists and casual passers-by.”
Customer research conducted by the National Gallery Company showed that customers had wide-ranging wishes for what they wanted to see in store and, although the Gallery would always have to provide merchandise for those wanting an emblematic keepsake inspired by the great masters on show, there were many customers who also wanted to see quite different things beyond typical reproduction artworks, for example.
EDGE also analysed flow and movement through the existing store, noting the issues the store had with peak volumes and bottle-necks at critical times. At non-peak times also, one of the tills was often closed down, meaning that this area then became unused or ‘dead’ space. Fixtures and fittings were also very standard and the room’s great height (with ceilings of up to 8m high) was not being fully utilised. A final problem with the existing store was that merchandising space did not correlate well enough with the products that represented the greatest sales, with walls of books taking up a lot of room, whilst selling relatively slowly.
“Our ‘big idea’ was the concept of a visit to an artist’s studio”, Michael Fern explained of the new store concept, “where the objects and artefacts on display are arranged in seemingly eclectic groupings, whilst forming an overall cohesive story to reflect the wide range of products available. We wanted to ensure that the shop had the same values as the Gallery itself, meaning that the shop needed to show it had really curated the products on display.”
The space was re-planned first, with a new centralised island till freeing up more perimeter space. Fewer floor-fixed units were proposed, allowing a better flow of customers through the space and fewer bottlenecks. Along the perimeter, a series of over-sized wall bays with much more layering and depth creates a more dynamic display with a richer visual story. Retail furniture has the feel of artist’s equipment with postcard units, for example, based on easels, plus display tables with classic trestle table proportions. New mid-floor loose display furniture allows for more compelling displays of objects and artefacts.
EDGE worked closely with the National Gallery Company’s commercial team and buyers to edit down the overall retail product selection and come up with a series of edited highlights which could be displayed in a number of emotionally-concise groupings.
The first of these is the highlights area, which groups a number of stand-out products together, either because they are ‘the best of the best’ or else the newest or the most seasonal, with a strong sense of editorial selection.
Two areas are given over to the perennially-popular product ranges inspired by the works of Monet and Van Gogh, whilst the third new themed grouping is the most purely art-based collection, made up of postcards, catalogues and art books representing a wide range of artists found at the Gallery. The fourth and final highlight area is called a fun- and play-based section dedicated to products aimed at children, with bespoke ranges of books, toys and art products for children shopping with adults or as inspiration for gift purchases.
EDGE was part of a team on this project which included project managers ab associates (who also oversaw the initial tender process as well as handling product sourcing logistics) and shopfitters and contractors Newman Scott.
“This was a hugely enjoyable project”, Michael Fern commented. “We had some excellent focus groups along the way who gave us a very positive response to the new concepts, whilst, as a client, The National Gallery Company was truly engaged at every stage and completely dedicated to the process of change. The client team completely embraced the rationale for reducing product densities and our desire to increase the time customers took browsing, with more space and time and original product mixes to inspire them along the way.”