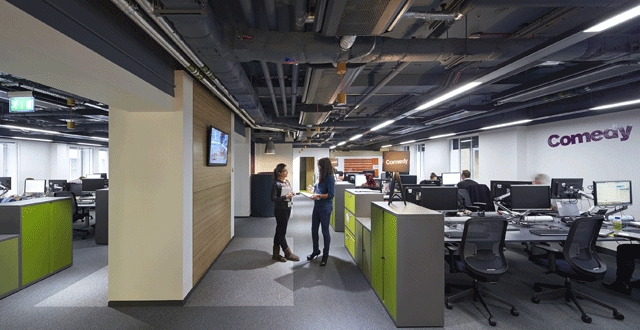 Located on Euston Road and bringing together more than 200 staff, the building – previously occupied by a merchant bank – is split over six floors and covers approximately 20,000 square feet. The building includes multiple meeting spaces and informal collaboration areas, a series of small editing suites along with a large ground floor kitchen hub which doubles as a staff briefing and presentation area, ensuring the space fully meets the demands of all the genres under one roof.
HOK was tasked with creating an engaging interior space, which would help encourage collaboration across the different teams. The design of the building also needed to bring to life the creative output of the different genres while celebrating the varied personalities of each of the departments. The team designed the building using the theme of a production house. Suspended ceilings were removed throughout to create the feeling of height and openness, while large scale floor to ceiling coloured write-on glass panels wrapped the existing structure on each floor to create dynamic working walls – key to the users working requirements. These provided a strong vertical link throughout the building and helped to support the concept of shared space, an integral feature of the project.
In open plan areas, high back sofas were used to create informal one-to-one meeting spaces away from desks, whilst in the basement of the former bank, an old safe was converted into a library space designed for script rehearsals.
HOK worked with its team of graphic designers to develop bespoke, innovative graphics to celebrate the production house theme and reflect the output of the various departments. The content included wayfinding signage and feature graphic displays. The BBC testcard provided the conceptual theme for the design and key BBC words and phrases were merged to create abstracted imagery. Brand focused meeting rooms in the basement were also created incorporating character graphics from the Monty Python series and productions of Shakespeare’s plays. Staff were also given the opportunity to bring in feature props to help fill the space.
Throughout the building redesign, there was an acute focus on material reuse and sustainability.  Furniture selection concentrated on sourcing emerging British design talent and locally manufactured pieces to create a unique and creative workspace, while the building included strong green credentials including: LED lightening, FSC rated woods and Greenguard certified floor coverings.

HOK also redesigned the WC layouts to optimise occupancy and bring the building in line with current DDA standards.
HOK’s Interior Designer, Claire McPoland, said: “As with New Broadcasting House, the BBC was keen that the interior design of Grafton House encouraged collaboration between these prestigious departments. The result is a vibrant space that not only celebrates their combined creative output but one that actively fosters a closer more interactive relationship.”
In addition to completing the interior design for BBC New Broadcasting House and Grafton House, HOK has recently been awarded the Television Centre,Stage 6, project for BBC Worldwide. Located in the original home of BBC Television, HOK will be providing architectural and interior design solutions to facilitate an innovative and stimulating working environment that will support a more agile working methodology for the organisation.  The project is due for completion in Autumn 2014.