When a bar of soap transforms into sound 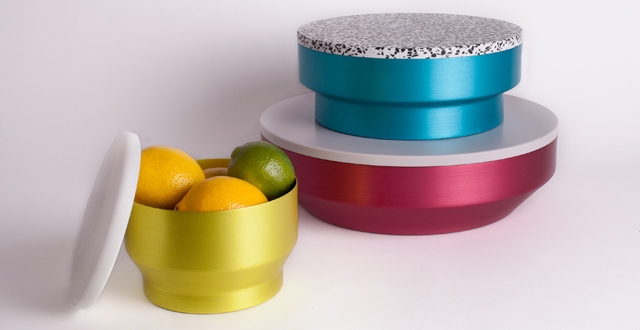 As the final concept in the chain has now been created,  Design Exquis at the Roca London Gallery will showcase how a design chain has culminated in a creation that is aural rather than visual and music composer Nick Phillips is the one who brings the Design Exquis story to a conclusion.

Taking the debate about design to a whole new level for 2013, and exploring sound as design, the exhibition’s curators, Florian Dussopt and Géraldine Vessičre, asked Nick to be the final designer in the process, which involves five designers responding in turn to an object created by their predecessor.

Through his creation, Metamorphosis, Nick transforms marble into sound. For this, he used a technical method to convert the grain and colour of the material into sound patterns, which became a sonic template to build his sound from. He then continued to draw visual inspiration from the marble to take the composition further. Played through headphones and also aloud in the gallery, the music accompanies visitors on their Design Exquis journey.

Metamorphosis is Nick’s response to object number five, Reflections by Lex Pott. Inspired by the book matching technique used in the wood and stone industry by which a solid block of stone is cut in two to open like a book to create a mirrored pattern, Lex created a marble room divider and a series of six shelves. The various organic patterns of the marble combined with very strong geometric shapes provide a contrast between the natural organic material and the geometrical industrial forms. For the shelves, Lex replaced the second part of the stone with a mirror to create an artificially accurate reflection. Thanks to the imaginary space created by the mirror, the object becomes complete. Some of you will already have seen images of the previous objects in the chain including object 4 Mountain Light whose angular shape reminded Lex of an open book and inspired his book matching technique. Mountain Light, by Studio Swine, is a desk light embedded in rock and elevated on brass legs to give an architectural feel. Warm LED lights are used to bring a summer ambience to the interior all year round. Exploring the integration of modernist architecture with nature through luxury interiors and glass facades, the designers used a new faux marble technique, with concrete as the principal material. This idea of utopia and the synthesis of the natural and the constructed was inspired by object three in the Design Exquis process, Summer Bowls. For Studio Swine this raised questions about the construction of paradise, the feeling of holidays and playful modernist architecture in the land of the endless summer – particularly Palm Springs and Los Angeles.

Summer Bowls is design studio 45 kilo’s response to the first design in the chain, an ice cream maker and the studio took inspiration from the ice cream theme and the various containers and colours that can be found in an ice cream shop. The bowls are handmade using a traditional metal spinner, which leaves traces of the wooden mould on the metal. Colour-anodized aluminium surfaces, more commonly associated with digital devices, and Corian tops give the bowls a contemporary feel. And at the very start of the process Italian food designer Jacopo Sarzi was inspired by the ancient technique of ice cream making, after spotting similarities between this and the traditional method of soap making. Making soap requires a combination of greasy and alkaline ingredients at a temperature of 45°C and involves intense blending, known as saponification. Producing ice cream also entails a blending process, a greasy ingredient and requires constant stirring but in this case, the temperature must be -21°C. Jacopo’s ice cream maker is made out of cork, a natural and food safe material. The connection? A bar of soap, the object which begins Design Exquis: the Roca edition. On display at the Roca London Gallery from 7 September to 16 November, Design Exquis – Roca Edition is inspired by the collective method of creation, developed by the Surrealists, known as Exquisite Corpse (Cadavre Exquis). Each of the five design teams was given one month to create something new from their predecessor’s work. None of the designers know who the others are nor what the other objects are, except the last one created.