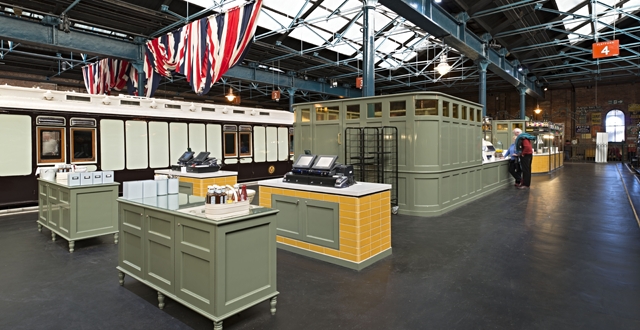 The radical revamp involved the rebadging and redesign of the popular York attraction’s two main restaurants, as well as creating a new third offer in an external, courtyard space. The re-designed restaurants are The Dining Car, a 450 sq m restaurant situated in the Grade II-listed Station Hall and The Mallard Café (named in honour of the beautiful art deco 1930s Mallard locomotive, which is a star attraction of the museum), a 310 sq m space located in the more modern section of the museum, the Grand Hall. The brand new third external area is The Container Café, which is made up of four industrial transportation containers, together with loose courtyard seating and three further adapted, open-sided containers offering semi-covered seating. All three dining spaces feature exciting, playful and highly original designs, inspired by the glorious heritage of the railways. The counters in The Dining Car restaurant, for example, are modelled on the feel of an old timber-clad ticket office, with a bespoke seating area inspired by vintage railway carriages, complete with luggage racks and carriage lights, as well as a series of framed ‘golden age’ room sets on casters, evoking the spacious feel of the lounges on a train like the Orient Express. The Mallard Café, meanwhile, has an industrial feel, with steel tubing, stainless steel shelves and metal studs, referencing the great engineering design behind Mallard and its sister A4 class locomotives, whilst the seven external containers refer to the railway’s great role in industrial transportation. “The National Railway Museum, which forms part of the Science Museum, is a very well-established and hugely popular museum, attracting over 700,000 visitors a year”, noted SHH Architectural Technologist Alasdair Galloway, who worked on the project alongside SHH Creative Director Neil Hogan. “Whilst we were looking to be as creative as possible, we also had many practical issues of robustness, customer queuing and access to work with, as well as safety issues, ensuring that loose furniture was kept away from the trains, for example, as the exhibits are real trains on rails, with adapted viewing platforms alongside. When it came to the spaces themselves, Station Hall is a single-storey former goods station, built in the 1870s and Grade II-listed, whilst the Great Hall is amore modern structure: a huge-scale, former locomotive depot, housing meeting rooms, plus a research facility and a function room, as well as exhibit space.” The Dining Car Restaurant
The first of the three new spaces is The Dining Car, a 150-cover restaurant down a long central raised platform area, which is made up of five key zones – two bar/servery areas; the ‘carriage’ fixed seating area, a further loose seating area and the final seating zone made up of room sets inspired by the great era of Victorian rail travel. Two further built-up platforms on the outside of each of the show trains allow for close-up viewing.

The first servery area is elliptical in shape, with curved ends inspired by old ticket offices, made of timber panels in a high-polish gloss grey/green paint finish, with additional yellowy/orange decorative glass. A mild steel frame integrates the structure well with the Station Hall ceilings, whilst mustard yellow gloss tiling, reminiscent of classic train station interiors, clads the servery counters. Activity and theatre are provided by a live flame kitchen, plus ovens for steaming and for bakery. The same food offer (cold and hot deli items, soup, sandwiches, salads and cold drinks) is replicated on either side, so that customers can be served from any approach. This also gives the operator flexibility, with one side able to be shut down when footfall is quieter. The servery has a mild steel framework, with a counter top in Silestone Nebula Lagoon stone and high-gloss tiles to the exterior.

A second servery area serves hot and cold drinks and bakery items, so that people wanting tea, coffee or cakes can bypass the main food area. Similarly to the first servery, it features green- painted timber panelling, except this time for the whole unit, with an elevated, screened-off pot- wash area to the rear. Directly beyond are the till stations, with a yellow tile and green-painted finish, plus two bespoke, domestic-furniture-style stations in green-painted timber for cutlery and condiments.

Beyond these, the first of the three seating areas offers 70 covers and is made up of eight booths, which feature bespoke carriage-style seating with antiqued brass upstands and integrated lights from Andy Thornton, which go on to form luggage racks above the seats, dressed with parcels in brown paper and vintage suitcases from the NRM archive. The second seating area features loose furniture (re-using existing bentwood chairs, along with new wrought iron and timber or marble tables by Andy Thornton), enlivened with additional ‘exhibit’ features, such as old ticket machines, a model train set inside a glass case in the centre of the space and old station signs and plaques on the enclosing red timber fence walls (which prevent loose furniture coming into contact with the trains). Two full-size ‘street’ lanterns also dress the space, with power taken from the ceiling above.

The final area is made up of three framed room sets (all on casters so that they can be moved around to create a wall formation when the restaurant needs to be closed off for functions). The room sets are made up of a metal frame, metal braces and timber panelling, with two open sides and a mesh metal ceiling and were designed in-house by SHH Creative Director Neil Hogan, with detailing by Alasdair Galloway, inspired by good crates from the early 20th century era. The ‘domestic’ period furniture was all sourced locally in York, whilst the external walls of the room sets are decorated with railway industry graphics from the same era.

The Mallard Café
The 120-capacity Mallard Café is a simpler space, located in the Grand Hall and within an area with a huge brick buttress at each end, as well as a main central truss beam. ‘As we couldn’t move these large features, we worked around them to make them contribute to the success of the layout’ commented Alasdair Galloway. The previous incarnation of the café had just a single straight counter, which had been problematic at peak times in terms of customer flow, so the new café features instead a semi-circular counter, echoing the shape of the buttress, so that customers can approach it from any angle. A stainless steel back counter incorporates fridges and coffee machines, with additional shelving, whilst the solid front counter is made up of Carrara marble table tops with deep mild steel plate edges and solid, tubular steel legs in black, inspired by the engine room of the Mallard train. Three heat lamps for the hot food offer are from the Oxford Lighting Company. A re- used chiller unit to the side of the servery has been made more contemporary and fitting to the scheme via a new mild steel framework and mesh panels to conceal its workings.

The Mallard Café features only loose furniture with bespoke oak tables with a mild steel frame and similar tubular design as used for the counter, alongside ‘School Chairs’ from Andy Thornton. To the edges of the space, high oak benches (with Andy Thornton’s Toledo bar stools) also serve as a protective frame to the loose furniture area, to prevent the furniture coming into contact with the trains.

A small retail area to the side, also designed by SHH, is made up of one elliptical and several rectangular blackened steel display units, as well as a table display, with a rivet design on the joins; plus a till station in blackened steel with an oak surround to the tills, plus a dividing screen in mild steel with inset Georgian-style wired glass panels. The Container Café
The third and final dining area is the new Container Café. Here, the exterior of the buttress has been incorporated into the container configuration, allowing them to share certain utilities with the Mallard Café directly behind. The Container Café servery is made up of four individual containers, which were fitted out off-site and then craned into position. One of the four is ostensibly decorative and used for branding, but also serves to create a canopy for the pizza offer below and mask the external portion of the brick buttress. The yellow container is the ice-cream offer, whilst the red serves pizza. A grey container alongside contains the pot-wash and prep area. All have been adapted to allow access through, with the pizza area also featuring a glazed screen to allow customers see the prep area, adding visual interest whilst they order and underline the freshness of the order. Three further containers have been painted and opened up (with one also cut in half) to provide semi-covered seating areas, in addition to the loose furniture in the courtyard. SHH Creative Director Neil Hogan commented: “The National Railway Museum project presented many operational challenges because of the sheer diversity and numbers of target audience groups. The solutions are not only creative in terms of design, but also in terms of the food offer and display and the way back of house functions in support of those offers. The brief really ticked all the boxes and was a perfect problem-solving challenge for the creative partnership that exists between SHH and client Levy Restaurants.”