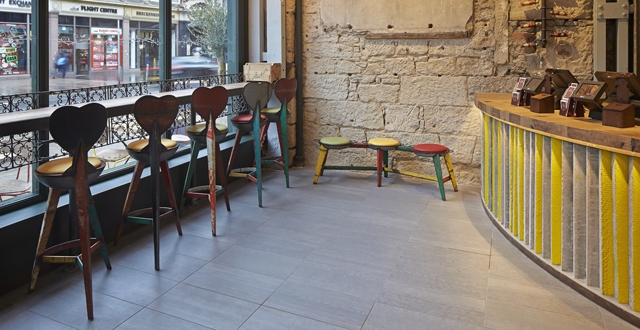 BuckleyGrayYeoman has completed its latest Nando’s Restaurant on Sauchiehall Street in Central Glasgow. The design company’s latest creation builds on the practice’s extensive experience of designing restaurants for the chain throughout the UK: using reclaimed materials and commissioned artwork to create an eclectic, lively space that communicates Nando’s Portuguese-South African heritage.

Located on Sauchiehall Street, in the heart of Glasgow’s shopping and leisure district, the restaurant packs a punch of exciting colours and textures to create a lively landmark on a prominent corner.

BuckleyGrayYeoman’s design reinstates a historic glass and timber shopfront, adding a dash of Portuguese flavour to create a high-quality frontage that contributes to the appearance and atmosphere of the high street. Sauciehall Street is BuckleyGrayYeoman’s second Nando’s restaurant in the city of Glasgow and one of an ongoing series of Nandos restaurants designed by the practice throughout the UK.

Matt Yeoman, Director of BuckleyGrayYeoman said: “Nando’s is a very enlightened client when it comes to the design of their restaurants and they always push us to provide inventive, adventurous design that is inspired, rather than constrained, by the raw materials of their brand. Thanks to this approach, each interior we have completed for Nando’s has taken on its own very unique character. It’s almost like a performance from a musical score: the song is always recognisable, but each rendition is unique.

“At Sauciehall Street we wanted to celebrate the roots of Nando’s and bring a taste of Portuguese-South African warmth to Glasgow.”

BuckleyGrayYeoman has filled its Nando’s interior with an eclectic mix of materials, texture and colour. The original features of the building have been exposed and the space filled with a characterful mix of salvaged objects, commissioned art and modern-classic furniture by designers such as Jean Prouvé. Brightly coloured ceramics and upholstery fabric by Paul Smith add a layer of polish, setting off the weathered patina of the reclaimed and restored elements.

The highlight feature of the restaurant is a mezzanine balcony clad with reclaimed wooden window shutters sourced from a salvage company in South Africa. The playful, layered effect created by this feature, with its mix of sun-bleached colours and textures, informs the design throughout the space. BuckleyGrayYeoman has stripped the 1920s building back to its bare fabric, exposing the visually engaging textures of the structural steel work, brickwork and heavy Scottish stone blockwork of the walls. New elements of the design echo this rough, textural aesthetic: such as the timber-topped service counter, which has been made using off-the-shelf concrete lintels, painted by hand and laid on end.Nando’s self-service counter takes the form of a brightly tiled island unit wrapped around the staircase down to the washrooms in the basement. A feature has been made of a cast concrete hand-wash sink, which has been incorporated into the island unit, facing the entrance: saving the trip downstairs for diners who just want to wash their hands. A reclaimed wrought iron screen beneath the sink adds a hint of Portuguese heritage and allows natural light down into the stairwell.

Diners have the choice to sit either in the lofty double-height front of the restaurant or on the more intimate mezzanine level. The walls of the mezzanine are tiled with reclaimed tiles and the ceiling covered with exposed strips of lath, a timber normally concealed in ceilings by a layer of plaster, adding to the raw, urban feel of the interior.

In addition to using reclaimed light fittings, BuckleyGrayYeoman also upcycled found objects such as bicycle wheels and wire baskets to create original chandeliers to light the space. Artwork commissioned by Nando’s as part of its programme to support South African artists completes the rich visual mix of the interior.

With the help of historic photographs, BuckleyGrayYeoman has reinstated the original 1920s timber and glass shopfront. Characterful elements, such as a stained-glass sign above the door and distinctive oriel window bays add to the quality of the frontage, making a positive contribution to the atmosphere and public realm of Glasgow’s major shopping street.