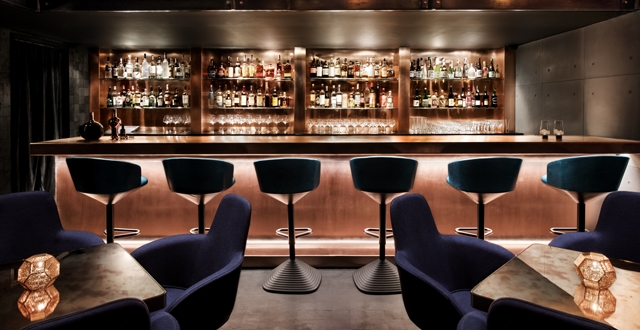 Inspired by Japanese mixology and American prohibition, Himitsu is a darkly theatrical speak-easy, peppered with the rich colours and textures inspired by the emotion and drama captured in Todd Murphy’s painting King of Birds. Himitsu (meaning Secret in Japanese) is the sister bar to popular Atlanta sushi haunt, Umi Sushi. The focal point of Himitsu is the illuminated copper bar which frames the alchemy performed by the mixologists and celebrates the craftsmanship behind the cocktail making process.

An installation of the newly launched Tom Dixon Melt pendants, are delicately suspended in the central void and create a striking gesture upon arrival. The Melt pendant draws inspiration from molten metal, distorted natural forms and emits a hallucinogenic glow that casts an ethereal luminosity and sets the tone for the rest of the bar.

Himitsu is furnished with a composition of sculptural pieces that were selected to create distinct silhouettes within in the space. Smoked mirror and natural marble table tops sit on industrial Tom Dixon roll bases to form a tactile landscape of surfaces which explore texture, distortion and the reflection of rough against the smooth.

The result is a luxurious lounge, central dining and an animated bar which are defined by the various seating clusters and light levels to create both open and intimate spaces for entertainment.