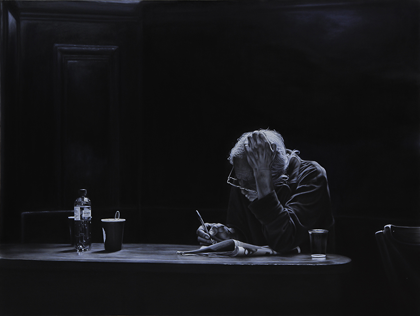 The finalists for this year’s Graduate Art Prize have been announced and voting is now open to all-comers, with the prize-winner decided upon as a result of the public vote. Here is the voting link, where people are encouraged to vote for as many artists and works as they wish –
http://www.graduateartprize.com/vote

The Graduate Art Prize is run by leading art consultancy ARTIQ, together with the London office of global law firm Herbert Smith Freehills, who sponsor the award and host the award evening. The winner is due to be announced on November 8th at a Private View at the offices of Herbert Smith Freehills by Ian Gatt QC, the firm’s Head of Advocacy, together with ARTIQ Founder and MD Patrick McCrae. This year sees a shortlist of 25 artists for the prize, the highest-ever number, with the finalist submissions in a wide variety of forms, including graphite drawings; oil, acrylic and emulsion paintings; mixed media paintings and collages; paper collages; c-type, giclée and monoprint photography, as well as bronze and aluminium sculptures.

‘The quality was so high this year that all the finalist works demanded their place on the shortlist’, commented ARTIQ’s Patrick McCrae. ‘We were also delighted with the sheer variety of works submitted. Young art talent in the UK is definitely alive and well!’ The Graduate Art Prize is now in its fourth year and is open to all final-year students on BA and MA degree courses at British art colleges or universities. Its reach and status are growing year on year and it continues to move beyond the major London teaching institutions to colleges and universities from every corner of the UK. This year sees the first ever finalist from Northern Ireland, for example.

The winning artist receives a Ł1000 cash prize, as well as – as with all the other shortlisted artists – the chance to be represented by ARTIQ. As a business, ARTIQ works with interior designers and architects and also directly with end-clients on workplace, hospitality and high-end residential schemes. Although the consultancy always creates a bespoke response to a bespoke brief for each space, ARTIQ is particularly proud of its links with new graduates and of its reputation for scouting for the best early-stage talent in the country:

‘Signing with an art consultancy provides a way through for young artists into the corporate art market, helping them to get going in their careers straight away and to build a name for themselves,’ commented ARTIQ MD Patrick McCrae. ‘Too many talented artists in this country give up early on because it’s such a struggle to make a living or because they believe that galleries are their only real possibility for furthering their careers.’

Both winning the prize and being a finalist have had a positive impact on the careers of many of the artists involved. 2015 finalist Huw Janes said, for example, ‘ARTIQ has rented almost all of my current collection of paintings to various clients – which is pretty excellent! It’s great to have this platform; my work is getting ‘out there’ and I am freed up from having to persistently hunt down opportunities and market myself.’ 2014 Finalist Malaika Sellen-Ferrere tells a similar story, ‘The Graduate Art Prize and working with ARTIQ has opened doors for me I didn’t think possible. Having just graduated from Goldsmiths, University of London, I didn’t believe that within my first year out I would already be renting my pieces. Now just two years on I am selling and renting my work consistently and am so grateful not to be a starving artist in London! ‘

Last year’s winner was Clara Durán (www.claraduran.com) with her work ‘El vapor nace en el silencio’ (Vapour is born in silence). This is what Clara has to say one year later: “Almost a year has already passed since I was recipient of the Graduate Art Prize, although it seems not so long ago. Since the prize I’ve been represented by ARTIQ, keeping our relationship active. Since then, many other doors have opened, but I will always keep this prize in my heart as it was the first opportunity I got when I moved to London and it meant an appreciation and recognition that have propelled my energy through the time that has followed it. ARTIQ’s team is made of such beautiful people, I still remember the feeling and the tears in my eyes when my name was called that night.’

The Graduate Art Prize was first set up by ARTIQ together with Herbert Smith Freehills in 2013, growing out of a pre-existing working relationship, after ARTIQ was commissioned to build an arts strategy for the law firm’s London office, including cataloguing and selling part of the company’s original art collection.

‘We are delighted to be co-sponsoring this event for the fourth year.’ Ian Gatt QC, Head of Advocacy at Herbert Smith Freehills commented. ‘The number and quality of entries continues to rise, with all 25 finalists exhibiting an excellent selection of their work in this year’s competition. Herbert Smith Freehills is proud to support this competition and to encourage artists at an early point in their career. We believe that art can both enrich the working and living environments and also challenge and promote discussion’.