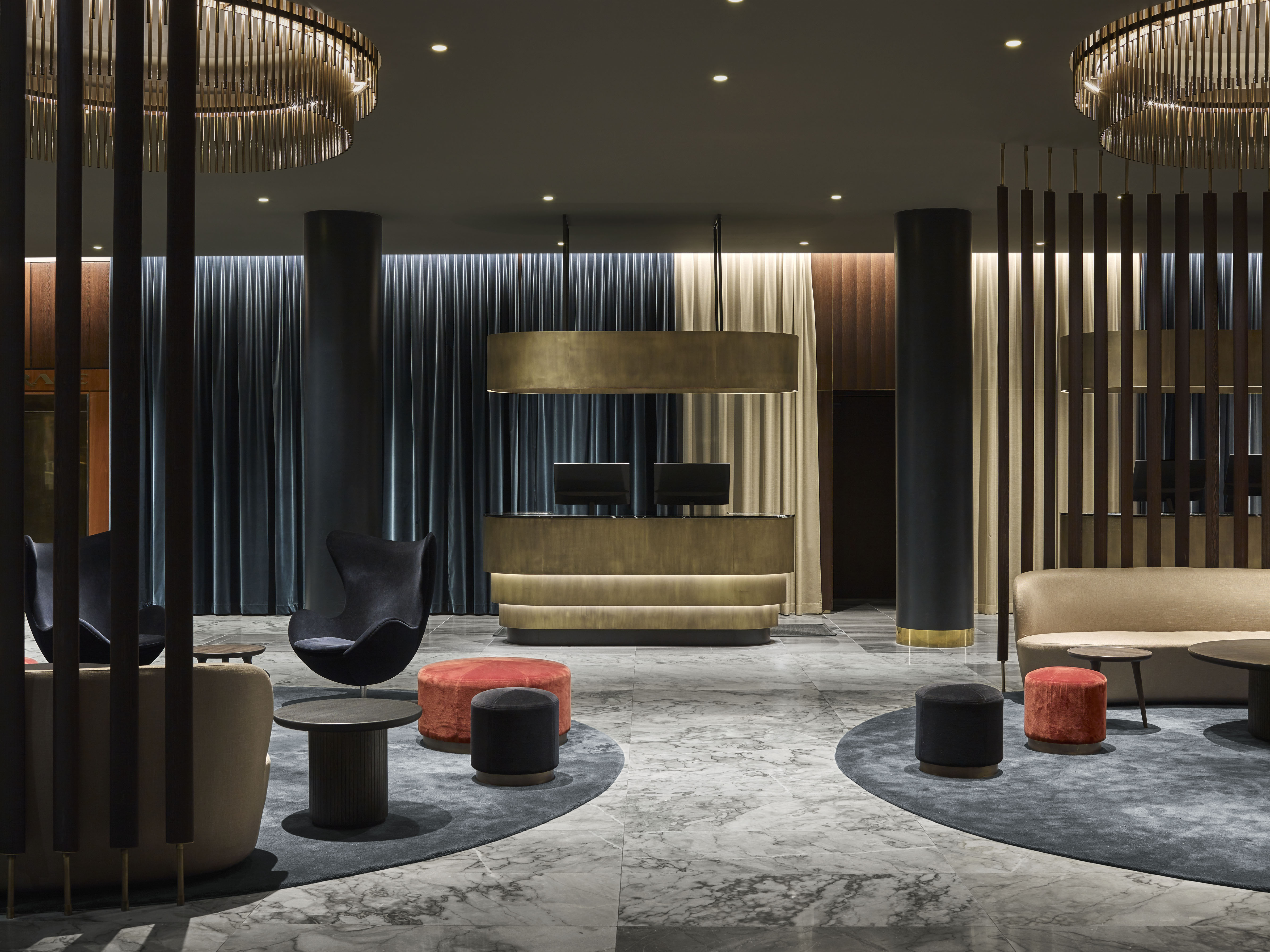 The full renovation, including 259 guest rooms and suites, lobby, meeting rooms and the new Café Royal restaurant is now in its final stage and is set for completion in spring 2018.

The Radisson Blu Royal Hotel is one of the most recognisable and cherished examples of Danish modernist architecture and interior design. When it opened it heralded a new era of modern hospitality brought to life through design from the architecture to the furnishing to the lighting right down the details of the cutlery and hardware.

Peter Bundgaard Rützou and Signe Bindslev Henriksen, Co-founders of Space Copenhagen, commented, “We are deeply honoured to be a part of this renovation. The hotel is a true landmark for design aficionados around the world. It is a destination. Our intention is to preserve its extraordinary character but we don’t want to turn it into a museum, we want to bring it to life for a new generation.”

Throughout the hotel, the new interior layout re-introduces original hotel features and furniture alongside new pieces and elements fit for the modern traveller which are designed to complement the hotel’s existing architecture.

Many of Jacobson’s most famous furniture pieces were designed for the Radisson Blu Royal Hotel: the Egg chair, Swan chair and the Drop chair amongst them. Working closely with Danish brand Fritz Hansen, Space Copenhagen have revitalised some of these existing pieces with new upholstery from Kvadrat / Raf Simons to suit contemporary use. In addition, Space Copenhagen have designed new furniture – the Loafer chair and Amore mirrors for &tradition – continuing the legacy of the hotel as a place where guests engage with new and inventive contemporary design.

The new Amore Mirror series, designed by Space Copenhagen for &tradition, were a result of the creative process involved in analysing the building, views, the reflections and changes in light. Signe Bindslev Henriksen commented: “The façade is the iconic face of the building. We were fascinated by the light both outside the building and inside the rooms. Seeing the constant shift of reflections from the façade is truly distinctive to the hotel.” Peter Bundgaard Rützou added: “We also wanted to somehow incorporate the views of the city from the top floors. There is a horizontal sequence of windows running from one edge to another. We wanted to echo that aspect inside the rooms, as well.”

In homage to the homely atmosphere Jacobson anticipated for the hotel, the duo introduced a selection of furniture, including re-upholstered Swan chairs and Drop chairs by Arne Jacobson, as well as their own Accent tables for Mater and Fly Sofa and Copenhagen Pendant for &tradition.

The guest rooms also feature beds upholstered with Kvadrat’s Fiord textile and wooden panelled walls that add a warmth and softness, enhancing the ambience of the rooms.

The Lobby at Radisson Blu Royal Hotel
Following Jacobson’s original intention for the lobby to be a lively public area that brings people together, Space Copenhagen have made a series of changes to the layout to better suit modern use.

Removing the lobby bar and redundant retail space and repositioning the reception desk provided room for new areas and niches for guests to lounge and work. The areas are populated with furniture including a curved variation of the Stay Sofa with Gubi and the new Loafer chair, which are juxtaposed in settings with original Arne Jacobson furniture.

Across the ground floor, the duo has reinstalled the original marble floors and wood and marble wall panelling and opened up the restaurant and bar area to the lobby, which is subdivided by transparent floor-to-ceiling wooden screens.

One of the most spectacular and recognisable features of the original design is the suspended staircase, which connects the ground floor entrance to the first floor meeting area. At the time it pushed the boundaries of what was possible in construction and engineering. Using photographs pulled from the hotel’s archives, Space Copenhagen has recreated original elements such as leather wrapping on the handrails. The have also introduced a bespoke lighting unit, a giant halo hung from the ceiling on the mezzanine floor above the staircase to reinforce the spectacle.

Café Royal Restaurant
Now in an open-plan alongside the hotel’s lobby, the new Café Royal restaurant headed up by acclaimed chef Christian Paradisi has been completely redesigned to create more informal and relaxed atmosphere.

Space Copenhagen has introduced more versatile seating with the restaurant and bar area to accommodate modern demands and behaviour in public spaces. A variation of soft lounge furniture combined with dining style Drop chairs and Stellar Works’ Ren chairs, allows guests to use the space for relaxing, working and socialising. The restaurant also features some of Jacobson’s less known pieces such as the Mayor sofa and the Giraffe dining table which was found in the hotel’s basement.

The open kitchen accommodates shifting demands and moods from morning to evening and the organic curves, and black and brass colours of the round bar link to the lobby’s aesthetics to create a more cohesive experience.

With a new entrance and floor to ceiling windows overlooking the busy shopping street Vesterbrogade, Café Royal aims to be a design-destination in itself for locals and hotel guests.

Meeting Spaces at Radisson Blu Royal Hotel
The nine meeting rooms located on the first floor have been named after Jacobson’s design classics such as the Egg chair. Each room has been designed to feel warm and formal but with a domestic touch.

Throughout the meeting rooms, guests will find the newly restored Egg and Swan chairs as well as framed lithographics – found in the basement – that illustrate the heritage of the hotel.

At present the renovation of the ground floor, lobby area, restaurant and bar, the first floor meeting facilities and a number of guest rooms are complete. The remaining rooms and rest of the hotel renovations are set for completion this spring.