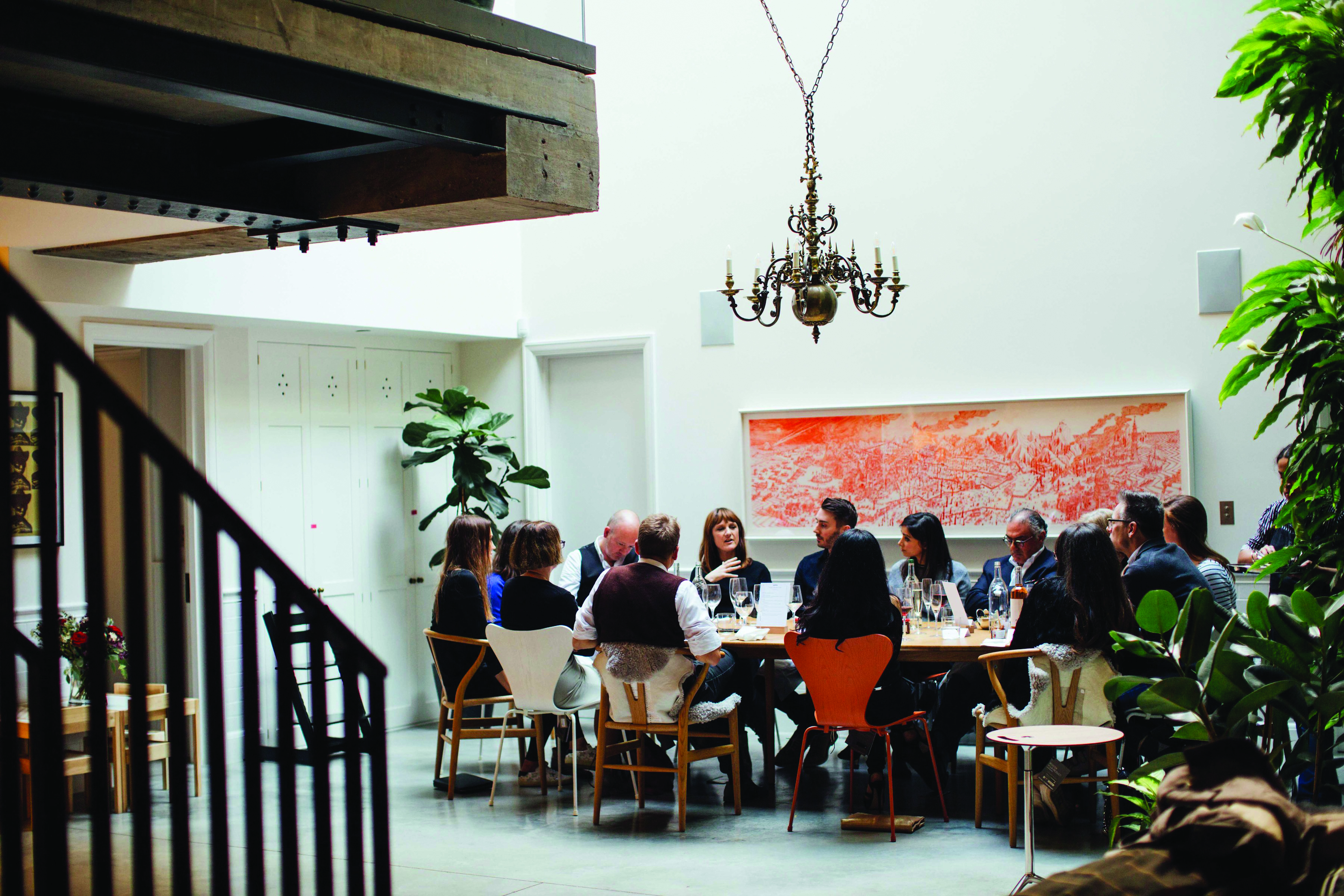 eporta hosted a round-table discussion at the start of 2018 with some of the most prominent voices in design, exploring the issues that affect businesses and how we should tackle them.

eporta brought together a group of prominent names in the design sector to face head on the issues affecting the interior design industry today, including fees and transparency, design leadership, sustainability and ethics.
The conversation opportunity, carefully crafted by the online platform, took place in Clerkenwell over two hours and involved 12 interior designers and architects sharing their knowledge and ideas on how to advance the industry. New markets
Is interior design a growing market, or is it dying? The conversation began by examining what lies ahead for the profession.

The majority of the round-table attendees work in luxury residential, with some hospitality projects. Outside of the crowded residential market, the designers were keen to discuss where the next opportunities might lie.

“I think it’s about looking into commercial spaces that we’ve not been bothered to look into as an industry before,” began Lori Pinkerton-Rolet, former British Institute of Interior Design (BIID) President, whose firm Park Grove Design specialises in hotels, care homes and dementia schemes. “Interior design is about making quality of life for people and making a difference in people’s lives, so we need to ask: where are the spaces that we can really make an impact and add value where we haven’t been able to before?

“For healthcare, this has been a hard sell. We’ve really had to demonstrate the difference that interior design can make in people’s lives. It’s now been proven and this market is growing, but I suspect there are other niche markets where this could happen.”

Changing perceptions
Participants agreed that the perception of interior design is still a problem when breaking into new markets. The value design adds to a business or institution can be invaluable but hard to quantify. Afroditi Krassa described how clients need to see a return on their investment and called for the industry to come up with a system for demonstrating the value of good interior design to potential clients.

“With design-led restaurants, you can easily prove the effect that design has had. We’ve refurbished bars and restaurants where you can see an immediate jump in sales, and you can prove that… In our industry we are a bit ashamed to talk about money or our work being commercially successful. Unless we can prove as an industry that there is a multiple return on our work, I don’t think our profession will ever be understood.”

Lori Pinkerton-Rolet described how her studio uses a simple in-house analysis process when working with new hotel clients. By comparing what competing hotels in the area are charging per room, her studio works with the client to analyse the investment against what they could potentially charge per room and the profit they could make on top.

The table agreed that while a system to analyse the success of commercial projects could be implemented by the industry as a whole, residential projects are more complex, as their success is not always measured financially. “You can’t talk to residential clients from the outset about ROI because there isn’t one,” said Brian Woulfe of London-based luxury interior design studio Designed by Woulfe. “It’s all about their preferences, their personal choice and how they want to live.”

Fees, transparency and procurement
The topic of fees and transparency came up frequently throughout the discussion, with all participants agreeing that justifying fees was one the most challenging aspects of running an interior design business today Daniel Hopwood, former BIID President, said “Putting forward a decent design fee is very hard as people just do not value the design,” he told the group. “We’ve been forced to charge a percentage on the project and the goods that I purchase. I prefer not to but it’s the only way that we can make it work.”

The lack of support and advice when it comes to fee structuring was also called out. “It’s so hard to find any information or advice on fees that you can then share with clients” shared Anna Burles of design practice Run For The Hills.

However, as Susie Rumbold pointed out, sharing information can be problematic: “We need to be careful as an industry when talking about fees, as we risk becoming a cartel,”

Mentorship
What became clear during the discussion was that more support could be provided for young interior designers as they forge their careers. It was agreed that there is a problem with the industry being too closed, with more established interior designers too busy or secretive to give advice to the next generation.

“I recently became a member of the BIID,” said Emma Hooton, who runs her eponymous practice from Winchester. “Although that did give me a certain amount of structure, from that point on, I didn’t really feel like there was anyone to call on.”

The attendees agreed that although there isn’t a formal mentorship programme within the industry, some had found a more organic support system that they accessed by simply meeting people at industry events and then following up with them for advice afterwards.

“I think mentorship is something that people in the tech industry do really well,” eporta founder Aneeqa Khan told the group: “The industry has managed to create this ecosystem – the question is, do people in the interiors industry have time to contribute to something like that?”

Designing for millennials
The topic of designing for the so-called “millennial generation” goes hand-in-hand with social media and the rise of Instagram-friendly interiors.

“In restaurant design, what’s really important is the ability to capture that ‘Instagram moment’,” commented Afroditi Krassa. “How can we capture it, brand it and control it? And how can we use that to help the restaurant stand out?”

Some panel members argued that designing an interior around Instagram alone makes for a hollow user experience. Stories were shared of clients who see images of interiors on Instagram or Pinterest and ask designers to precisely recreate it for them. Other spoke of a reluctance among younger clients to work through a brief or think about practicalities of a space.

The question of whether millennials care more about what other people think than previous generations prompted an immediate chorus of “yes” from the group. However, others came to their defence.

Aneeqa Khan asked the group to focus on the opportunity; “I think the reality is most do care about what other people think and therefore there is a really big opportunity for design here. The most important thing is communicating that going through a proper design process means better results for them. For me it’s an education exercise; the question is how do you communicate effectively?”

Suggestions included encouraging millennial clients to name the emotions they feel when looking at their favourite Pinterest and Instagram reference, a process that forces them to go beyond the surface. Other designers explained how they walk their clients through existing projects to clearly explain the practicalities and rationale behind material choices and layouts.

“Interior design is not brain surgery,” said Jo Hamilton, kicking off the topic. “It’s something that can enhance people’s lives… Making it accessible to the average Joe is something that I think is really important.”

Meanwhile, Afroditi Krassa was adamant that pigeon-holing the roles of architects and interior designers was limiting and unnecessary: “We don’t live in a black and white world any more. I personally don’t give a damn where somebody comes from and what training they have as long as they can do a great job; that’s part of the millennial culture,” she explained. “At the end of the day, the work speaks for itself.”

Sustainability
Offering a more hopeful outlook for the mind-set of future generations, James Soane, who also teaches at the London School of Architecture, told the group: “The other day one of my students asked if we could talk about ethics in design – no student has asked me that question for 30 years and I think it’s part of people wanting a better future.”

Soane believes that his students have become disenfranchised by previous generations and are disheartened that the construction industry is presently worsening the state of planet. “The lovely interior of today is the landfill of tomorrow” he warned.

It became clear from the discussions that followed that sustainability has a branding issue. “When trying to win a contract in a meeting with clients I probably wouldn’t bring up sustainability because it’s not considered luxury,” stated Brian Woulfe.

Meanwhile, Lori Pinkerton-Rolet said it was a matter of cost: “We all know that rubbish food is really cheap and good food is expensive, and it’s the same with products. I’m doing a sabbatical in Japan in the spring and I’m really excited about it because the Japanese market has a different relationship with materials… They value, treat and appreciate them in a different way but are also prepared to pay a lot for them.”

“It’s about just asking that question,” said Anna Burles. “When your team is starting to specify or pull together samples, we have to ask ourselves: which is the most ecological? Which one is locally made and will support the local industry?”

In response, Daniel Hopwood put forward the idea of an industry manifesto that interior designers could use as a reference for standards to adhere to when carrying out building works or specifying furniture.

Ethics
At the close of the conversation, the designers reflected on how all of the topics that had been discussed, from training and operations to fees and sustainability, all boiled down to ethics and the need for industry-wide guidelines.

“One thing that unites everything is ethics,” stated Rabih Hage. “Every profession needs to protect the ethics it believes in. All of the elements we are talking about now point to how we can all be better designers and business owners… We need a benchmark of behaviours,” he proposed. “We need to focus on the ethics of the profession and advertise it, communicate it – not only among ourselves as a circle of people in the profession, but also to our clients, the users. This is the most important thing.”