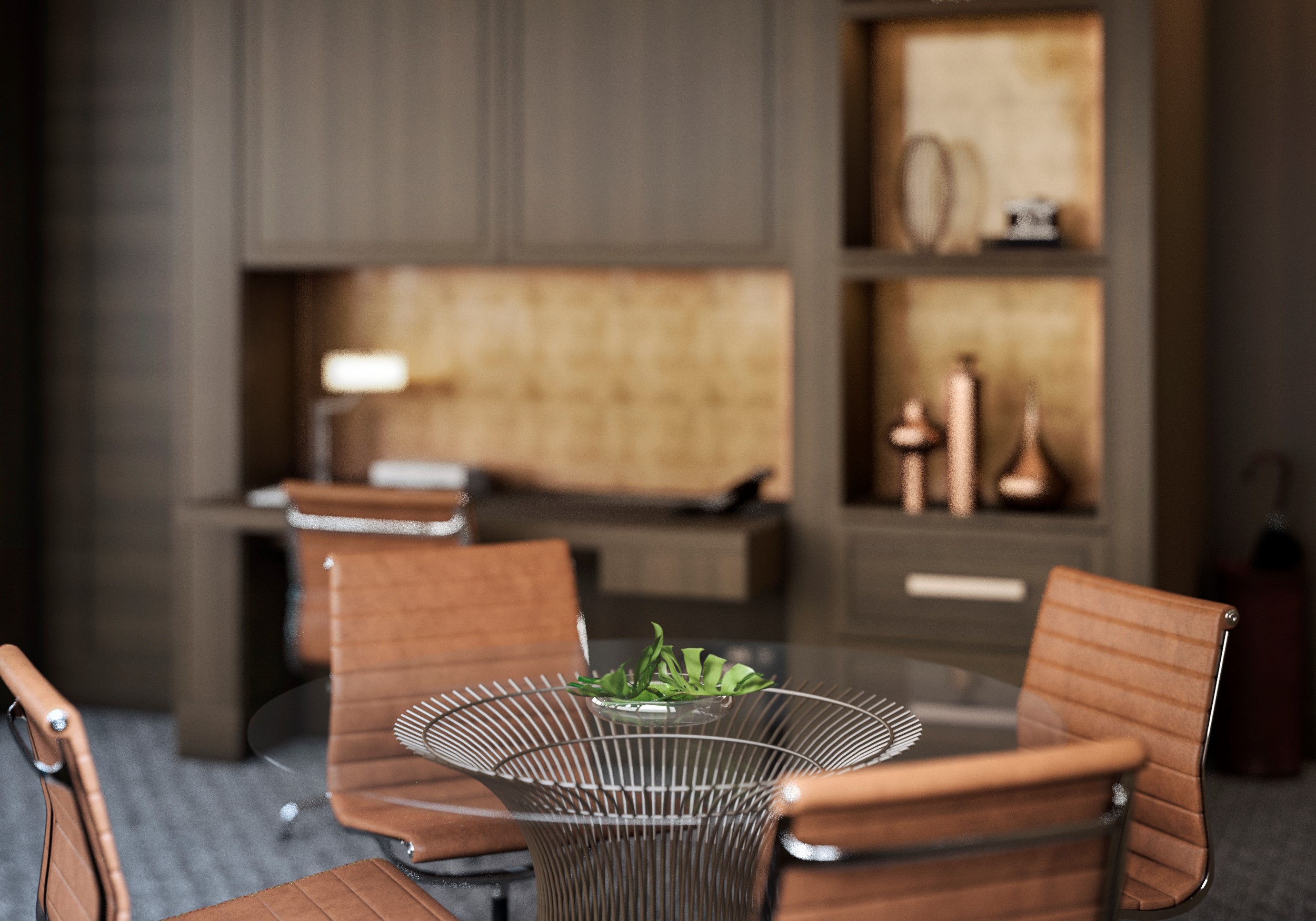 Studio Proof has completed the redesign of all 16 guestroom floors at one of London’s most iconic mid-20th century hotels, Royal Lancaster London.

Part of the most comprehensive renovation of the property in decades, the nine-month refurbishment took place whilst the hotel remained operational, raising the hotel to a new level of luxury and instigating the return of “Royal” in its name.

Famously a film location for Michael Caine’s The Italian Job and a milieu for everyone from The Beatles to the Royals, the new design recaptures the mid-century “cool” of Royal Lancaster London’s heyday whilst celebrating the building’s location overlooking both Hyde Park and the City. Housed within the hotel’s tower with its wrap-around windows, all 411 guestrooms and suites benefit from exceptional panoramas over London. In order to make the most of these, Studio Proof has tailored the interiors to frame the views. Curtains have been replaced by two sets of blinds – one blackout and one privacy – to leave views unobstructed. The designers also made the decision to resize the doors, widening and heightening them so that guests are immediately confronted with the spectacular vistas, creating a striking first impression and a sense of greater space.

The décor across floors three to 17 is light and restrained. Lime-washed pale oak and textured neutrals pervade, creating bright and calming spaces that are enlivened by accents of colour, which give a nod to the view outside the window. The North facing “City Rooms” are punctuated with deep yellows and mustard tones, whilst the “Park Rooms” are infused with muted sages and pastel greens. On the 18th top floor, which accommodates the largest suites, the palette becomes richer and connects with materials used in the new public spaces. American walnut replaces the pale oak and rooms are dressed in deep teals, petrol blues and suave cognac tans.

Classic Rooms
Without changing the 21sqm footprint of the classic rooms, Studio Proof’s redesign transforms them through masterful planning and sophisticated furnishing choices into rooms full of light and a sense of space.In many of the rooms, an in-built lime-washed oak desk extends across half the width of the window-lined wall, its frame dropping down to form a daybed that stretches to the other side of the room, making full use of this otherwise dead space. Upholstered in plush Fox Linton mohair velvet, the daybed invites city weary occupants to lounge amongst lush Dedar and Zimmer & Rohde fabric covered cushions and enjoy the view. Wooden panelling continues from here, encircling the room to create visual continuity, blending with console tables made from the same oak and finished with smart bronze detailing. The bedside and coffee tables are made from lacquered metal and bespoke mirrored glass featuring a delicate inlay of silk organza, giving a tantalising depth to the surfaces and softly reflecting the light from the mid-century inspired pendants and wall lamps, custom-made by Heathfield & Co. In the bathrooms, sleek white carrara marble lines the walls and vanity surfaces, providing a dynamic contrast to the stunning Antonio Citterio design Hans Grohe tapware in the shower area, whilst wooden drawers link back to the guestroom décor.

Park and Spire Suites
Similar in style to the guestrooms, the 15 Park and five Spire Suites sit at opposite ends of the tower, facing Hyde Park and the city respectively. The beauty of their positioning means that they each benefit from dual or treble aspects as well as substantially more square meterage with five of the higher floors completely remodelled to achieve exceptionally spacious suites. Each Park Suite offers a view with a room, presenting guests with spectacular panoramas from a retreat of ultimate comfort and luxury. The scenes through the windows in the bedroom are reflected in the large sweeping mirror behind the king size bed, bringing the location into the space. Lime-washed pale oak panelling is prevalent in both the bedroom and separate living areas. A contemporary Moooi chandelier suggests the branches of a tree, throwing dappled light across the metal and glass Knoll ‘Platner’ table below. This shimmer is echoed in the rich velvets of the two bespoke sofas. Beautiful modern metal and marble coffee and side tables from Tacchini complete the seated space, illuminated by tree-like brass framed lamps.

The Spire Suites – so called because ten church spires are visible from them – are equally notable for their sophisticated style, the scheme takes its cue from the “City Rooms” palette of mustards and dark yellows. Artwork is more metropolitan than in the Park Suites and this style is also reflected in the selection of the mathematically spherical ‘Raimond’ chandelier by Moooi, and the hidden pocket door that divides the space. Lancaster and Royal Signature Suites
Situated on the top floor, the two expansive 69sqm and 83sqm signature suites are the jewels in the crown of the hotel. Their positioning at either end of the tower means that they each benefit from three exterior walls lined with huge windows. In both, dark American walnut panelling extends from floor-to-ceiling creating a rich backdrop for the sumptuous Zimmer & Rohde teal velvet seating whilst modern and humorous objet d’art fill cabinetry recesses and give the spaces a high-end yet comfortably residential feel.

Positioned near to the in-built desk in the Lancaster Suite, mid-Century Vitra tan leather chairs encircle a Knoll glass and metal table, illuminated by a Raimond light from Moooi. This arrangement creates a debonair office space within the sizeable living area. In the bedroom, a textured grey Holly Hunt fabric headboard with lacquered metal detailing adds further elegance, whilst panelled mirrors behind the headboard reflect the phenomenal panorama visible through the glazed surround of the walls.

The Royal Suite is the larger of the two and is equally as highly appointed and plush. A mirror lines the wall next to the glass topped, oblong dining table, making the vast area appear even larger and reflecting the panorama. The slight elevation of the living area means that guests lounging on the bespoke sofas are at the perfect height to watch the sun set over the park.

The size, views and bespoke design cumulate to produce the hotel’s most luxurious accommodation. The suite can be extended by the addition of up to two of adjoining guestrooms.

Guestroom Corridors
Design is used thoughtfully to support the guest experience in the bedroom corridors of this large and busy hotel. Doors are grouped together in sets of four, with one pair facing another. Both the doors and the in-fill panels around them are finished in light oak, in contrast to the darker wall coverings between the sets. By highly illuminating these areas, and creating subtle changes in the carpet design, the rooms are signposted as pause points, whilst the rest of the corridor remains darker, subconsciously encouraging people to talk more quietly and with precise spotlighting singling out the bespoke artwork pieces . On the upper floors, the corridors feature much higher ceilings  and are clad in dark American oak, adding a sense of grandeur appropriate to the suites on these levels.

Lift cars and lobbies have been replaced and upgraded to correspond with the redesigned guestrooms, and a fifth lift has also been installed to better deal with the influx of conference guests during the hotel’s busy seasons.

David Morris, Creative Director, Studio Proof, “The refurbishment of the Royal Lancaster has been our ultimate project as it has allowed us to use our broad mix of skills to lead the hotel through rebranding, brand identity design, architecture and interior design. The owner has been bold and financially committed and, by embracing a holistic approach, has enabled us to create a cohesive and believable story throughout the hotel. The icing on the cake for me has been that high-end mid-20th Century design is my personal favourite, so the work been a real joy.”