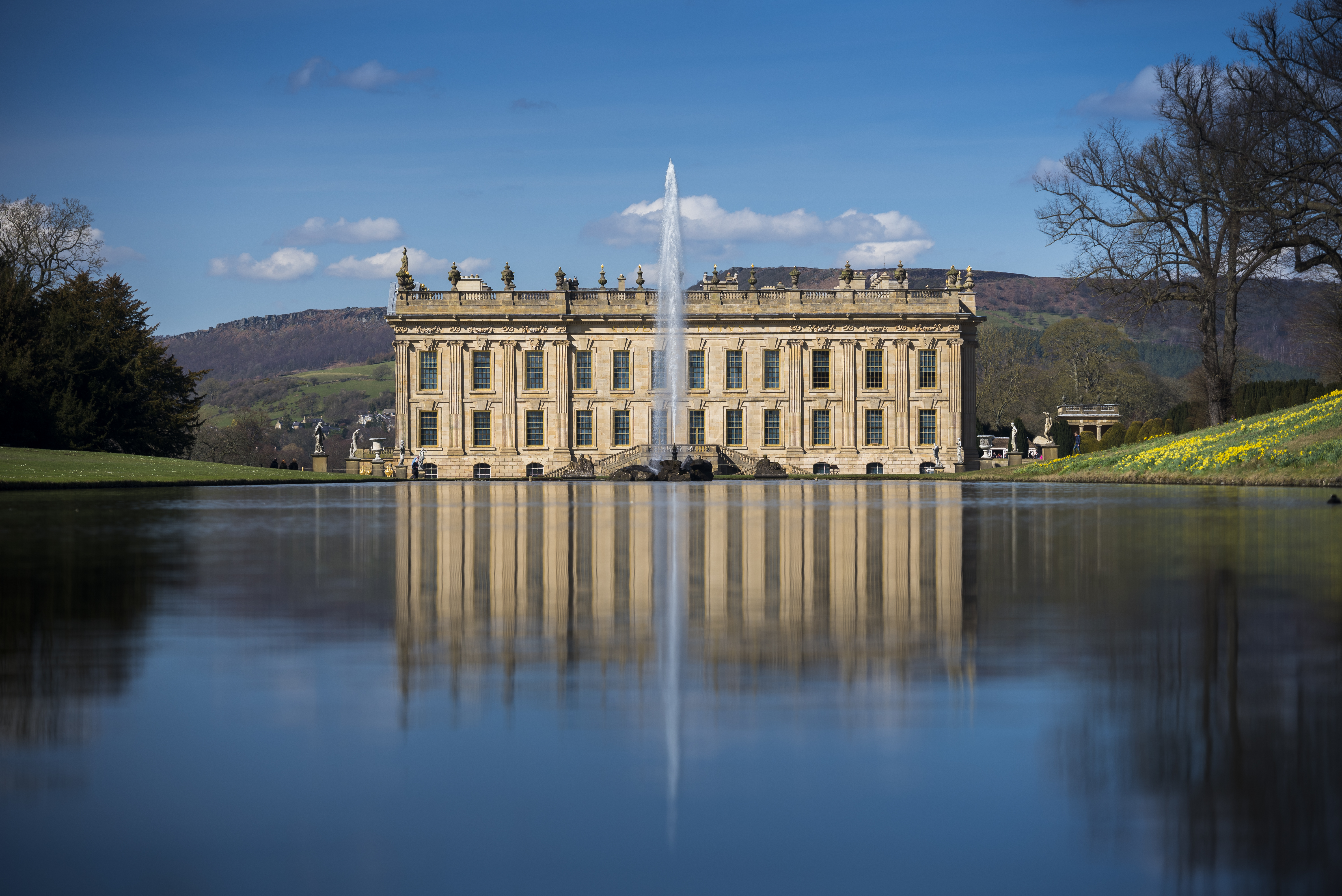 As Chatsworth celebrates the completion of its biggest restoration and conservation project in 200 years, architecture and design feature in many of this year’s talks, included in the Art Out Loud festival, running 21 – 23 September. Art Out Loud at Chatsworth (21-23 September), the only UK weekend festival of public talks about art, has announced its full programme for 2018, with tickets on sale now.

Art Out Loud at Chatsworth, now in its fourth edition, takes place in the stunning grounds of Chatsworth, Derbyshire.

Focus on Architecture and Design

In a year that has seen Chatsworth restored to its full glory following a 10-year renovation programme, an appreciation of architecture and design is woven through the 2018 festival.

On Saturday, in their talk Living with the Builders, the Duke and Duchess of Devonshire will be joined by the specialist conservation architect who directed the works, Peter Inskip. This will be a rare opportunity to hear a discussion on their initial ambitions, reflections and what it was like to be ‘living with the builders’, on a grand scale. They will be in conversation with Anna Farthing, curator of the current exhibition Chatsworth Renewed: the house past, present and future, which celebrates the skill and commitment of those involved in this decade of works. The exhibition continues in Chatsworth House during Art Out Loud.

John Pawson, the British architect famous for his minimalist aesthetic, will reflect on a body of work which spans a broad range of scales and typologies, explaining how, whether he is designing a bench or taking a photograph, ‘it’s all architecture’.

In a talk curated by the Royal Institute of British Architects, Alex de Rijke founding architect of dRMM, whose design for Hastings Pier won the 2017 RIBA Stirling Prize and Herefordshire based architect Kate Darby will be discussing their practices with Marie Bak Mortensen.

After her 2016 appearance at the festival, Amanda Levete, founder of AL_A and one of the UK’s leading female architects, returns to talk about the dialogue between history and modernity in her work on two very different museums, the V&A in London and the Museum of Art, Architecture & Technology – MAAT – in Lisbon.

Two talks take a more historical view of architecture, as author Kate Hubbard and artist Ed Kluz look back to 16th century Derbyshire with Bess of Hardwick and her houses, and developer Trevor Osborne and James Berresford, Chairman of the Buxton Crescent Heritage Trust, discuss the history the Buxton Crescent, as well as plans for its future. Seats can be booked online for the complimentary Buxton Crescent talk.

Design critic Alice Rawsthorn will speak about her book Design as an Attitude, exploring how a new generation of designers and architects are using design to pursue their humanitarian, political and ecological objectives.

Art historian Dan Cruickshank will talk about his recent journey through Syria and the BBC TV documentary he made on its architecture, history, national pride and identity. At Art Out Loud, he looks at IS’s cultural terrorism, examines the monuments damaged, and ponders the challenges – artistic, technical, ethical – of repair, reconstruction and engineering during the 1890s.

10.00 ARTiculation – Inspired by buildings
A presentation of four talks about architecture by students from schools across the country, which participate in the national ARTiculation programme. The ARTiculation Prize is a national competition designed to give young people a forum in which they are able to express their ideas on art. Tickets are complimentary but must be booked in advance.

14:30 John Pawson – It’s all about architecture
For over thirty years – and to global acclaim – John Pawson has been making rigorously simple architecture that speaks of the fundamentals but is also modest in character. In this talk, Pawson considers the influences that have helped shape the themes and preoccupations of his work and examines why, whether he is designing a bench or a building or taking a photograph, “it’s all
architecture”.

12.00 The Duke and Duchess of Devonshire, Peter Inskip and Anna Farthing – Living with the builders
In March 2018, Chatsworth, and particularly its inhabitants, the Duke and Duchess of Devonshire, rejoiced in the completion of the biggest conservation and restoration of Chatsworth house, its garden and park, since the 1820s. Specialist conservation architect, Peter Inskip, was appointed to direct and oversee the work required to renew the infrastructure of the building. In conversation with curator Anna Farthing, the Duke and Duchess and Peter Inskip talk about their initial ambitions and share their reflections on the completion of the programme, and on “living with the builders” – on a grand scale. Chatsworth Renewed is open until October 2018.

12.00 Alice Rawsthorn – Design as an Attitude
Design is one of the most powerful forces in our lives, but is often prone to muddles, misunderstandings and clichés, and to being dismissed as a manipulative commercial ploy and a superficial styling tool. In her new book, Design as an Attitude , design critic Alice Rawsthorn explores how a new generation of designers and architects, are using design to pursue their humanitarian, political and ecological objectives. At Art Out Loud Alice describes how these designers are liberating design from its commercial role, and redefining it as an eclectic discipline of instinct, ingenuity and resourcefulness at a turbulent time when we face changes of unprecedented speed and scale on every front.

14:30 Amanda Levete – History and modernity: a tale of two museums
Against the historic backdrop of Chatsworth, architect Amanda Levete looks at the dialogue between history and modernity in two very different museums, the V&A in London and the Museum of Art, Architecture & Technology – MAAT – in Lisbon. In an exploration of these two recently completed projects, Levete shows how architects today respond when they come up against the resistance of history and how they develop bolder ideas because resistance forces them to think harder. Examining these museums’ contrasting but equally rich settings, she shows how innovation and respect for history can not only coexist but also capture the public imagination.

14:30 Kate Hubbard in conversation with Ed Kluz – Bess of Hardwick and her Houses
Bess of Hardwick (1527-1608) had a passion for building, constructing four houses in Derbyshire over her lifetime. Author Kate Hubbard and artist Ed Kluz will discuss the part Bess played in the building process, the importance of her craftsmen, the contribution of Robert Smythson, who designed Hardwick New Hall and Owlcotes, and the legacy of her houses. Kate Hubbard’s latest book, Devices and Desires: Bess of Hardwick and the Building of Elizabethan England , examines Bess’s life within the context of the Tudor building world and is published this year Ed Klutz is an artist, illustrator and printmaker who explores contemporary perceptions of the past through the reimagining of historic landscapes, buildings and objects.

16.30 Dan Cruickshank – Palmyra 2018: the death and life of history in a troubled land
BBC TV historian and author of new book Skyscraper Dan Cruickshank discusses his recent travels with photographer Don McCullin through Syria, and the damage that has been wreaked by the civil war on not only the population but also on the country’s cultural heritage. In his talk, he describes their journey through Syria – Damascus, Homs, Krak des Chevaliers and Palmyra – and reflects upon architecture, history, national pride and identity. He looks at IS’s cultural terrorism, examines the monuments damaged and ponders the challenges – artistic, technical, ethical – of repair and reconstruction.

16:30 Trevor Osborne and James Berresford – The Buxton Crescent – Restoration and Renaissance
Buxton’s stunning Crescent was the centrepiece of the Fifth Duke of Devonshire’s plans to establish a fashionable Georgian spa town in Buxton. The restoration and redevelopment has secured a major investment of circa Ł50 million in Buxton and put the town back on the national and international map as a spa town. Developer Trevor Osborne and James Berresford, Chairman of the Buxton Crescent Heritage Trust, look at the important history the Crescent shares with Chatsworth by discussing the Crescent’s past, restoration and future.