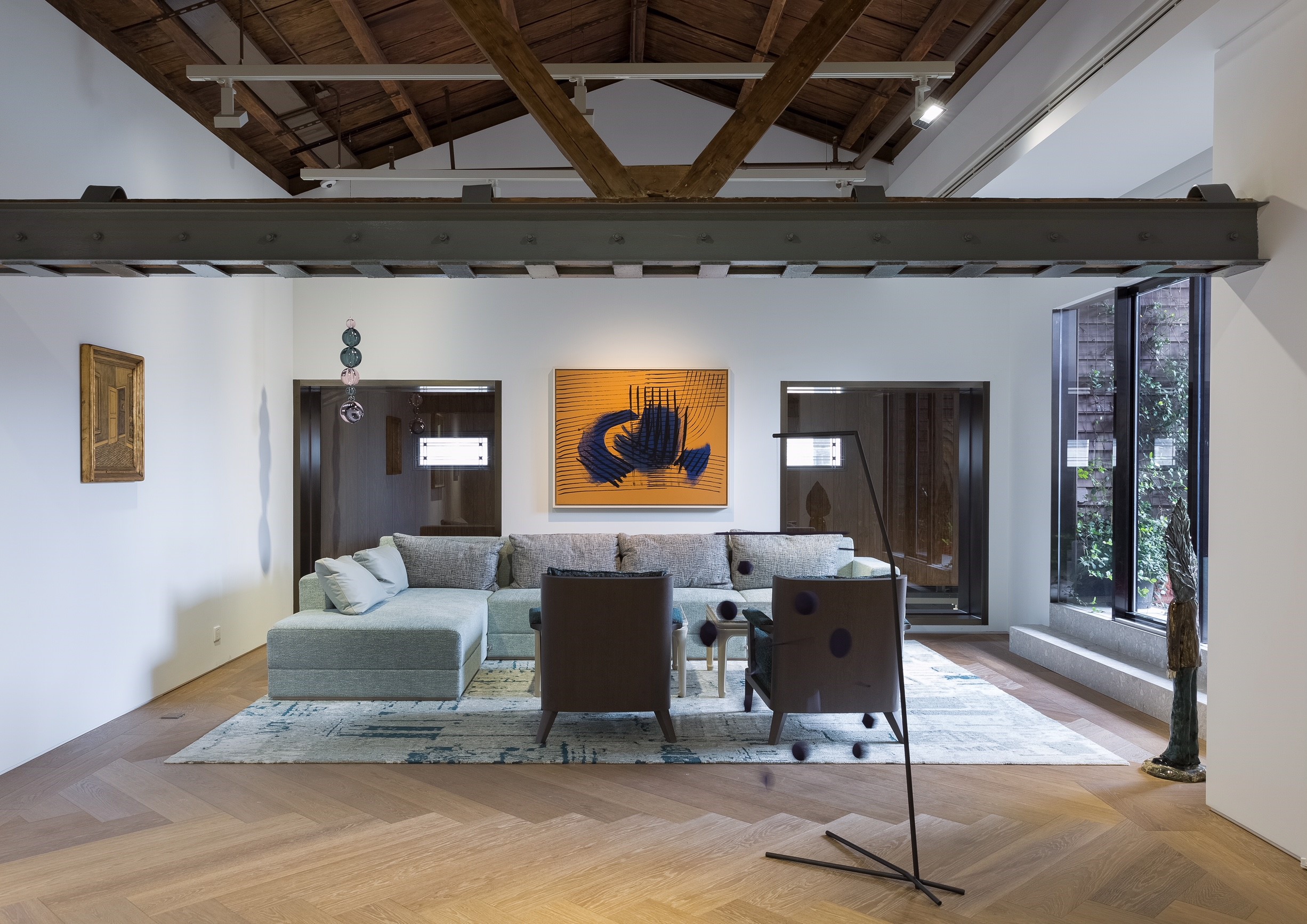 The distinct spatial experience has been designed by the internationally renowned Hong Kong architect André Fu and his studio AFSO. This marks Fu’s third collaboration with Perrotin – Fu was first commissioned to create the Hong Kong space in 2012, as well as the Tokyo outpost which opened in summer 2017.

Nestled opposite Shanghai’s Rock Bund Museum, the new space occupies the top floor of a historical three-storey brick building known as the Amber Building, a former warehouse used by the Central Bank of China during the Republican period. To this day the building occupies a prominent location in Shanghai’s thriving art landscape, with its proximity to the city’s major museums and auction houses. Presently Perrotin’s largest art space in Asia, the 1,300 sqm gallery includes four unique exhibition rooms, as well as an upper mezzanine level that houses a private salon with an adjoining terrace. Whilst there is a common thread of visual purity that links the three spaces that Fu has created for Perrotin, there is a unique vision behind each venue that is specific to its context. For Perrotin Hong Kong, the ethos was intended to celebrate the city’s famous harbour, and for Tokyo, to create a street facing facade that provokes an urban life context. Fu’s concept for the Shanghai gallery is to capture the atmosphere of the former French concession and the spirit of the Bund. The design ethos of the two-tiered gallery is rooted in the juxtaposition between the distressed timber framework of the existing building, and Fu’s introduction of an open white open box directly below it to unite the old and the new. The harmony and tension Fu provokes with the two prominent design languages within the gallery is provocative and highly emotional. As well as the overall dialogue between the rustic and the pure, Fu’s intrinsic goal with the design is to evoke the atmosphere of a private Shanghai mansion, a nod to the context of the project and its surrounding neighbourhood. Guests are first greeted by a vast reception that feeds into four exhibition salons, each conceived with a different personality, ceiling treatment and proportion. One of the salons has a matrix of exposed I-beams that are integrated into a roof-scape of distressed trusses, whilst another room is adorned with a double height volume with wrought metal windows that draw natural light into the environment. To accentuate the sensibility of a heritage manor, each of the four salons has been crafted with a distinct floor pattern – an unconventional twist to enhance the scenography of the art-space experience. On the upper level, a private salon is designed to allow more intimate discussions and a place for friends of the gallery to have a moment of quiet retreat from the city beyond. Conceived as an intimate loft space, the room is also highlighted with an open truss ceiling and an adjoining picturesque terrace that offers a quaint view over the heritage rooftops of old Shanghai.
Perrotin Shanghai opens with an exhibition of work by Belgian artist Wim Delvoye. Shortly to follow is the highly anticipated show by Takeshi Murakami during Shanghai’s Art 21 and West Bund Art Fair this November.