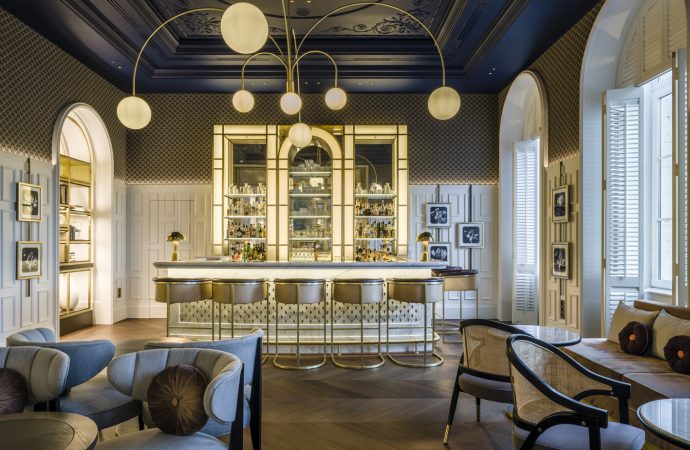 Goddard Littlefair has completed the restoration of Hilton Imperial Dubrovnik, re-injecting golden age glamour into one of Europe’s most beautiful hotels to appeal to today’s cosmopolitan, sophisticated traveller. Hilton Imperial Dubrovnik, situated just above Dubrovnik old town, was originally built in the 1890s and went on to serve the great Mediterranean cruise liners docking in the city in the early 20th century. Then called ‘The Grand Hotel Imperial’, with a French Riviera feel and the glamorous cachet of an international clientele, the hotel was a roaring success for many decades, but, during the Yugoslav war, it was shelled and then used to house refugees. The hotel was subsequently brought back to active life in 2005.

Goddard Littlefair was initially commissioned towards the end of 2016 for a phased set of redesign works, with the first two now completed and including the reception and lobby, The Lobby Lounge, The Imperial Bar, The Executive Lounge, all connecting and guest-room corridors and all of the hotel’s 149 standard and executive rooms and nine suites. A refurbishment of the hotel’s existing restaurant, Porat, on the lower-ground floor, will follow in late 2019.

The brief to the design team was to unlock the true potential of the four-storey hotel’s spectacular location, architecture, reputation and history. Martin Goddard commented, “Our inspiration lay in bringing back the romance of the hotel’s former glories and layering glamour into each individual space by means of a Riviera palette, soft detailing, a 1920s yachting influence and a subtle evocation of the hotel’s original elegance, whilst at the same time balancing that with clean and contemporary lines.”

Reception
Guests enter a stunning, double-height reception, with tall, arched windows and cool ceramic flooring in a bespoke two-tone diamond pattern, created by Goddard Littlefair and inspired by the old stone streets of the city. The reception is spacious, soothing and calming, so that guests relax instantly, especially during the intense heat of the summer season.
The visitor’s eye is immediately taken by a spectacular central chandelier, made up of eleven, sculptural, globe-shaped and antiqued brass pendant lights, hanging from chains in rows of three on antiqued brass rods. The feature light was designed by Jana Novakovic, interior designer at Goddard Littlefair and was manufactured by Croatian lighting company Dekor, who worked on most of the lighting on the project. The scheme’s overall lighting consultant, especially focusing on architectural lighting, was DPA Lighting Consultants.
The ceilings in the reception feature newly-instated decorative mouldings, whilst the walls are clad in inset dove-grey panels at the upper level, with feature areas of moulded timber panelling at ground floor level.
The bespoke reception desk features a Carrara marble top and dark-stained timber panelling to the front, matching the wall panelling behind, with sculptural brass desktop lights by Dekor at each end. Behind the desk, set within timber-panelled wall surround, is a triptych of artworks by Croatian artist Antonia Čačić, specially-commissioned for the project by the scheme’s art consultants ARTIQ. The 3m-long abstract triptych incorporates a palette of soft hues inspired by the colours of the Dalmatian coast.
The lobby waiting zone opposite includes a standalone concièrge desk and varied arrangements of loose furniture, all bespoke-designed by Goddard Littlefair, as with all the furniture in the scheme, which was manufactured in Croatia by Internova. The Lobby Lounge and The Imperial Bar
Two lighting features immediately take the eye, one at the centre of each area. First, a bespoke chandelier in The Lobby Lounge, inspired by 1950s bathing caps, has cascading white porcelain petal shapes set on a brass framework and was made by Imagin. The Imperial Bar, meanwhile, features a bespoke, six-armed chandelier in brass with spherical opal glass shades, designed by Goddard Littlefair and manufactured by Dekor.
The Imperial Bar, located at the far end of the space, is announced via a demarcating, stand-out brass surround screen, featuring brass shelving and fretwork panels set within its side arches and across its top section, where LED lights are also concealed. Dark timber detailing links the screen to the dark timber used for the furniture legs. The brass screen was also specially-designed to house a spectacular art piece – a second commission by Croatian artist Antonia Čačić, which sits at the centre of the screen and is in fact a triptych once more.
The Imperial Bar has a pronounced deco feel, with its shapes inspired by the arched windows along the outside of the space. The bar itself is curved, with a Carrara marble top and a patterned, mosaic bar front, also in Carrara marble with inset brass detailing. Seven bespoke bar stools have a brass frame and seat backs, with pads in ribbed, sand-coloured leather.
The ceiling in The Imperial Bar is painted blue, for added drama and a moodier feel. The windows in the bar all have classic, white-painted shutters at their sides, for a subtly different feel from The Lobby Lounge. The Executive Lounge
The Executive Lounge features a refurbished white ceiling and applied mouldings to the walls, with inset panels in a rattan wall covering from Phillip Jeffries. Flooring, for the upper two thirds of the space, is an inset carpet with a timber outer layer and brass trim from Ulster Carpets. Two gilded mirrors at the far end are by Water Gilders, with a small salon-hang arrangement of art between the mirrors, once again curated by ARTIQ. Bespoke tables run along the far end and down both sides of the room, with table tops featuring two different designs in Carrara and Nero Marquina marble, with ebonised timber pedestals. Bespoke seating includes three sofa seats below the antiqued mirrors in a peacock-blue velvet with ribbed scroll backs, with chairs opposite featuring a pale blue leather seat pad, a dark timber frame and a cane back. Seats accompanying the tables down the sides are in a dove grey with an ebonised timber frame and scatter cushions feature fabrics from Tissus d’Hélène. Guestrooms and Corridors
The hotel features an Imperial Suite, together with eight other suites and 149 executive and standard rooms. Linking corridors are inset-carpeted with timber borders in light oak and carpet runners, with a bordered bespoke design in a subtle colourway running from greys to varying shades of blue, so that it seems to fade at the border, made specially for the project by Brinton’s.
The design feel of all the rooms is light and fresh, with classical clean lines and a refined and elegant colour palette of blues and silvers, plus the sparing use of pale pinks. Flooring is a natural light oak, supplied by a local company in Dubrovnik and arranged in a herringbone pattern.