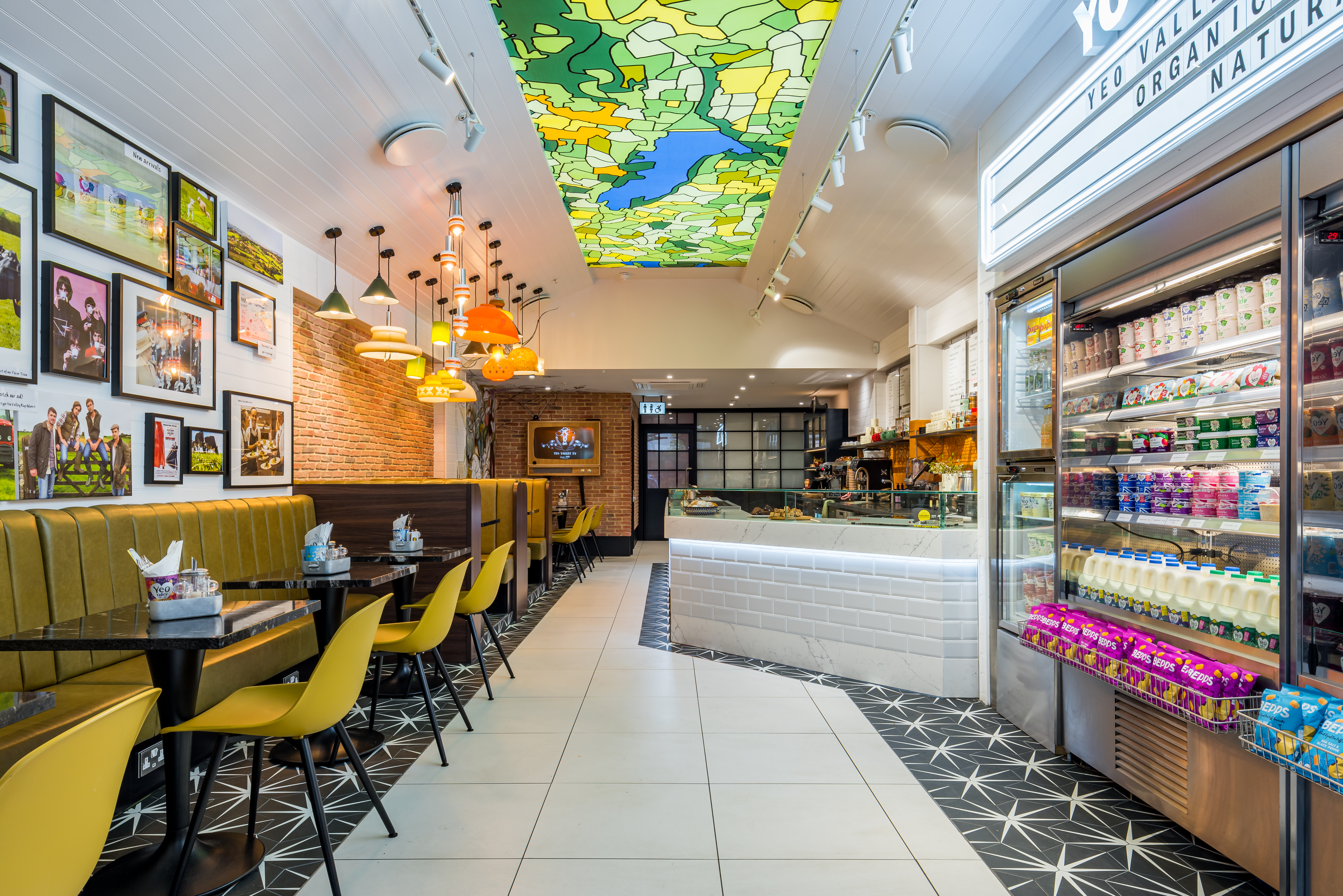 Somerset family farm enterprise, Yeo Valley, is expanding on the success of both its dairy product range and its Blagdon-based farm, café and garden in deepest Somerset by opening its very first London outlet, comprised of a two-storey café, shop and workspace on Queensway in west London, designed by award-winning South West creative agency Phoenix Wharf.

As a brand, Yeo Valley is synonymous with the quality of its products and its ethical approach to animal husbandry, with the farm’s famous herd digitally-monitored, given only the best organic feed and mattresses to sleep on. The Mead family, who run both the farms and the Yeo Valley enterprise, speak regularly about an approach to business and farming that’s good for animals, people and nature, drawing on the wisdom and experience of family head, Mary Mead OBE.

As part of the company’s natural growth and evolution, an increased London presence became desirable and the decision was taken to create a branded shop and canteen offer in London, as well as creating additional company meeting and workspace.

A two-storey site was located in Queensway, an area of London currently undergoing major regeneration, which offered a great location between Hyde Park and Notting Hill. The site is located directly opposite Queensway Station, making it prime for people coming out of the station or the park and looking either for eat-in or takeaway food.

The brief for the new space was to create an engaging, inviting showcase for Yeo Valley, incorporating a dine-in café, grab’n’go produce and a mini retail store, as well as a work and meeting space on the site’s upper storey. The designers were asked to maintain and express the brand’s nature-inspired ethos and friendly, fun and unpretentious feel, whilst also creating links to the existing HQ. This included integrating the work of artist-illustrator Natasha Clutterbuck, who has a long association with the brand and whose murals are part of the Blagdon Canteen, as well as creating artwork for special editions of the product range.

The new café-store has two street-facing, retail-style, full-height boutique windows to either side of the main double-door entrance, with backlit storefront branding above for The Yeo Valley Café, using the brand’s existing heart-shaped identity. On the inside of the store, the backs of the windows are dressed in curved floor-to-ceiling timber panelling, with hidden doors allowing easy access for updating displays.

The interior features a dual ‘warm and cool’ concept, with a white and bright ‘cool’ area to the right for grab’n’go produce and the mini retail area, underlining the freshness of the dairy produce range, and a warmer ‘natural’ sit-down area to the left, underlining the brand’s countryside origins and authenticity.

A central off-white flooring corridor is for circulation and unites the spaces, with a feature flooring apron to both sides in a black-and-white, star-patterned Spanish Hex tile with a matt finish. White, horizontal timber-style slats line the upper walls and the angled ceiling, whilst an eye-catching, huge-scale ceiling feature down the centre of the space takes the form of a stained-glass-style light-box installation, showing an abstracted map of the Yeo Valley farm HQ in Blagdon.

The left-hand side of the ground floor space features a natural colourway with a slightly 70s retro feel, including a deep olive green used for the left-side booth banquette seating. Loose seating is in the form of retro moulded chairs for a home-from-home feel, whilst bespoke tables are topped in Brazilian cosmic black granite, with a single, central tulip-style metal base. Brand stories also feature in this area, including a picture wall along the first third of the space, featuring a variety of images from the Yeo Valley HQ. The central section of the wall, alongside the booth seating, features exposed brickwork, which is used again to the left side of the rear wall as both a rustic reference and an allusion to the Blagdon company HQ building.

A lighting feature made up of a clutch of 19 pendant lamps in different designs and set at different lengths, with shades in yellows, golds and orangey-reds, hangs over the booth seating and catches guests’ eyes as they enter. The final third of the left-side wall houses a cottage-garden-inspired mural by artist Natasha Clutterbuck.

The rear wall features a large-scale retro-style TV against the exposed brickwork, telling the ‘Yeo TV’ brand story visually (without sound) and offering a distraction for anyone queueing to pay at the back-right pay counter. The remaining rear wall is made up a crittal-effect door and screen with lightbox windows to give a feeling of added depth and an illusory sense of space beyond.

The right-hand, ‘cool’ side of the space features a product chiller wall and then an angled counter, both featuring blue-tinged LED underlighting. The counter has a solid stone, delicatessen-style top and plenty of back-wall interest in the form of mustard-coloured tiling in an angled herringbone pattern. As customers arrive at the pay-counter, a large, glossy, petrol-blue dresser, bespoke-designed by Phoenix Wharf, catches the eye against the backwall. The dresser features a granite worktop that matches the table tops, plus an inset sink, and is used both for drink and glasses storage and for Yeo Valley merchandise display – branded cups and aprons, for example. At the top, a cut-out section features a winking golden cow in glittery acrylic; a reminder of the brand’s dairy farm origins and playful nature.

To the rear left are customer toilets, a fun and stand-out feature, designed as ‘Blagdon Station’ underground toilets as a link between the London and Somerset sites, with curved tube-tunnel corners and ‘pomegranate’ wall tiles, sourced from H.E. Smith, the original London Underground manufacturer. Further details include tube-type platform signage; a ‘priority seat’ sign above the toilet; an ‘All Change Here’ baby change unit; a ‘Loo Roll’ tube-style roundel; a platform-style floor detail saying ‘Mind the Gap’ and a ‘Way Out’ sign.

A door to the right of the dresser leads to a back-of-house area, including a changing room for the chefs, plus food storage. From there comes access up the stairs to the first-floor office, kitchen and meeting room. Here, the crittal-style of doors and windows continues, separating the main workspace from a large meeting area, which has a cork wall with hidden storage behind it (there is further concealed storage throughout), a wallpaper feature wall, a credenza and a large timber meeting table.

The general workspace includes sit-down workstations and a higher, bar seating work area for laptop work. Another feature wallpaper area features alongside, whilst the rest of the walls are painted white, with a rich red stairwell – a visual link to the corridors of the Blagdon HQ. Flooring is either an earthy brown or orange carpet tile in the office and meeting spaces, with a speckled, charcoal surface in the kitchen. The upstairs toilets also embody the brand’s sense of fun, with black glossy tiles, black sanitaryware and a red ceiling, accompanied by wallpaper made up of black and white shots of animal-faced people pursuing leisure activities.