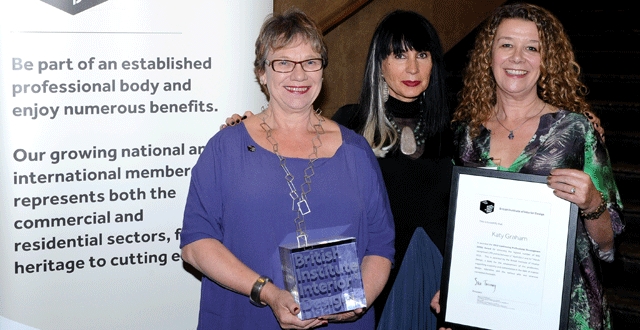 As part of its Annual General Meeting (AGM) held at RIBA’s HQ, London on Thursday 27thJune, the British Institute of Interior Design (BIID) revealed that Past BIID President and Director of the Interior Design School in London, Iris Dunbar is the worthy recipient of its prestigious Merit Award. Iris received the award for her outstanding contribution to the interior design sector over many years.

A pioneer of Interior Design in its modern form, Iris studied Interiors within the School of Architecture at Dundee University and set up The Interior Design School in 1991. Throughout her career as a practitioner and educator, she has promoted the interior design profession, inspiring clients and designers to create an interior environment that lifts our spirits. She is a Past President of the British Institute of Interior Design (2008-2010), and in her role as board director of The International Federation of Interior Architects and Designers, Iris is involved with worldwide interior issues.

Sue Timney, President of the BIID commented “Iris is a fantastic supporter of our organisation, both in the UK and on the international stage. She has also served the Institute as a very successful President and is currently an Executive Board Member with the International Federation of Interior Architects/Designers. This award is in recognition of her tremendous contribution to the profession and I am honoured to present her with this award.”

Also as part of the AGM, Katy Graham, Director of London-based practice, interiorbeing, was awarded the BIID CPD (Continuing Professional Development) Award for her achievement in earning the most points out of all BIID members in the calendar year. Katy Graham accumulated 92 CPD points, therefore winning the BIID CPD Award for 2013. In addition to attending lectures and seminars, Katy recently gained an MSc with distinction in Construction Project Management from the University of Westminster.

As part of her course she won the RICS London Student award for achieving the highest marks of any London university student studying within the field of architecture and the built environment and she also won the CIOB International Research and Innovation award for her dissertation.

The AGM provided BIID members with the chance to learn about the institute’s progress over the past twelve months; and join in conversation with the committee about the future plans for the Institute.