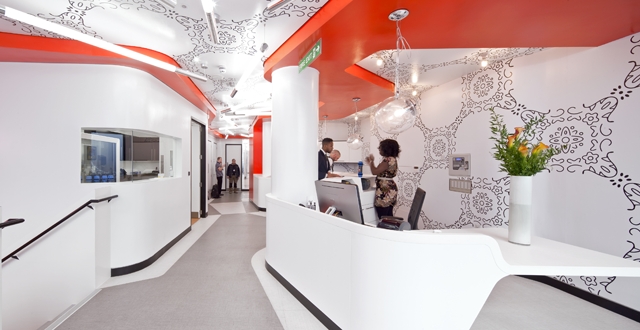 London’s Soho has a new addition to its bustling and vibrant streets. Nestled between the chic coffee shops and plush hotels of Dean Street is PENSON’s latest finished project: the Dean Street Express.

A walk-in self service sexual health clinic with a design inspired by the aesthetics and themes of the local area, Dean Street Express is just a stone’s throw away from its sister clinic 56 Dean Street, where the brand colours of bright orange and crisp white originated from.

With an iPad registration system for new and old patients alike the entire testing process has been automated, which fast tracks everything from how long it takes you to get into a screening room to how long it takes to get your results. The process remains automated even after patients have gone through to the screening rooms, with a pneumatic vacuum system which shoots completed samples through tubes in the ceiling and pops them out in the testing laboratory.

Even the lab is one a of a kind, where the scientists can be watched from the reception through a large window and where the world’s first on-site Infinity machine has been put into action to enable all results to be received within six hours.

The four screening rooms each have a different design inspired by the various unique shop fronts, store décor and neon signage in the area, the reception even has its very own bit of neon, making it an official member of Soho. At the bottom of the winding fluid staircase the waiting room is made up of space-saving cinema seats and the adjoining consultant rooms are decorated with vintage movie posters, paying homage to the theatrical history that runs through Soho’s veins.

With bright orange bouncing off the mirrored walls, black and white patterns covering the ceiling, and artwork of hundreds of images of Soho taken by one of the clinic employees, this project has ended up looking as little like a hospital as possible.

Funding for the NHS is constantly getting tighter so everybody has to adapt, but working to a shrewd budget and still delivering a space that makes a statement is one of our specialties. Working out a low cost plan from the beginning meant that at the end we were able to unveil one of the most radical clinics the NHS has ever seen.

Comfortable, luxurious and bright areas replace cold, clinical and claustrophobic spaces, with the added freedom to feel as relaxed as possible.