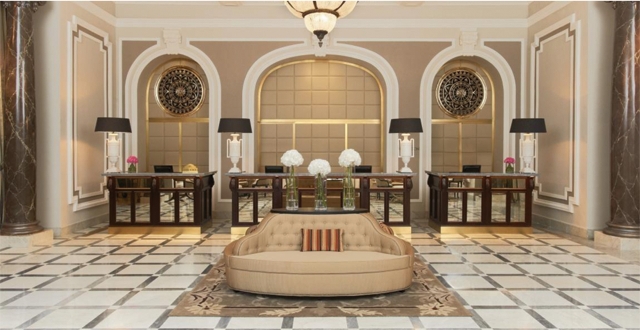 The design of the interiors, led by The Gallery at HBA London, enhances the elegant, feminine presence that has characterised the hotel since it opened a century ago.

A beloved landmark in the city since it was inaugurated in July 1912 by the queen, the hotel has been centre stage to the San Sebastian International Film Festival since 1953. Hotel Maria Cristina was built during the Belle Époque when haute couture was born and women’s liberation was growing in importance. This provenance, alongside the fluid Art Nouveau detailing by its original architect Charles Mewčs, has formed a beautiful canvas for the next chapter. The designers’ vision for the refurbishment was sympathetic to the building’s status as a listed structure; refined feminine touches were added within the hotel’s existing framework to create a sense of comfortable and abundant luxury.

Inge Moore, Principal, HBA London and The Gallery, commented, “For Hotel Maria Cristina, named after the Spanish Queen Consort and located in a city with the stunning Art Nouveau architecture, creating a design narrative around powerful women felt right from the start, from the queen consort herself to the female stars of stage and screen who had stayed and played there. So we designed to reinvent the particular glamour, opulence and celebrity that has characterised this hotel. The femininity of Hotel Maria Cristina is now seductive and elegant as well as confident and forceful.”

The renovation of Hotel Maria Cristina is part of a larger strategy to invest in the restoration of Starwood’s most celebrated Luxury Collection hotels. The reopening of Hotel Maria Cristina follows in the footsteps of Hotel Alfonso XIII, a Luxury Collection Hotel, Seville, which underwent a meticulous multi-million dollar refurbishment – with the interior design also led by The Gallery at HBA London – and re-opened in March this year.