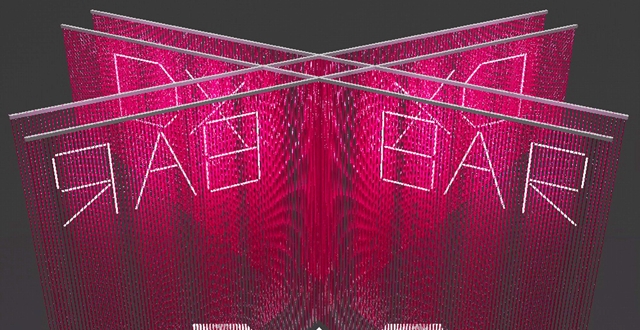 The May Design Series exhibition at ExCeL London 19th-21st May is set to bring together the whole of the design community this May, whilst also providing a unique platform for new interior designers. Ten student groups from the Royal College of Art’s MA Interior Design programme have been shortlisted in a competition to design two public spaces within the event: the DX Bar and the Champagne Bar. Tasked with the challenge to create lively hubs with a distinct design aesthetic, the brief stated that the bars must serve an essential practical role, allowing visitors to meet up, relax, reflect and re-energise, to decide where to set off next around the show. The brief set the bar high, asking the aspiring interior designers to create dynamic spaces with visual impact whilst considering temporality and sustainability.

Project groups were guided by guest tutors and experts in architecture and interior design including Tomoko Azumi, Chiara Ferrari, Rachel Forster and Ian Higgins. The groups were led by Ab Rogers, Head of the RCA’s Interior Design programme, whose studio Ab Rogers Design is devising the overall exhibition concept for the May Design Series.  Rogers commented that he sees his role at the RCA as “championing interior design as a rigorous discipline which needs to be better understood than it is at present,” the pop-up bar project was an exciting way for students to experience the “detail, rigour, science, poetry and conceptual elements” of interior design.

UBM Brand Director Andrew Vaughan commented, “We’re thrilled to be working with the designers of tomorrow to create two stand-out spaces within our show. We want the May Design Series to be an experience like no other, innovating and improving the worn-out trade show concept. The idea behind the DX Bar and Champagne Bar was to create environments for our visitor community that celebrate our design industry, and we’ve seen a really fresh perspective from each of the finalists. The students have all drawn on their individual skills and cultural backgrounds to create something new and exciting that also reflect London’s position as a global design influence.”

RCA student, Naomi Grieve said of the project, “It’s been a journey,” her collaboration with Vanessa Gerotto includes a striking black and gold design which weaves a visual interpretation of the qualities of champagne into its dynamic environment. “There was on one side [achieving] a sense of performance and having a space which is not fixed but reacting, provoking engagement with the audience, and on the other side having this concept become as functional and efficient as possible.” The project gave the duo a taste of the design process in the real world. “We need to be faced with the realities of budget and timescale but not let that hinder our ambition – trying to find that balance”.

The judging panel includes UBM’s Andrew Vaughan and Kali Nicholson, Ab Rogers Richard Greenwood and Louise Martin from Ab Roger’s Design. The two winning designs will be revealed at the opening of the May Design Series at ExCeL London on 19th May.