MKV Design get creative at the casino 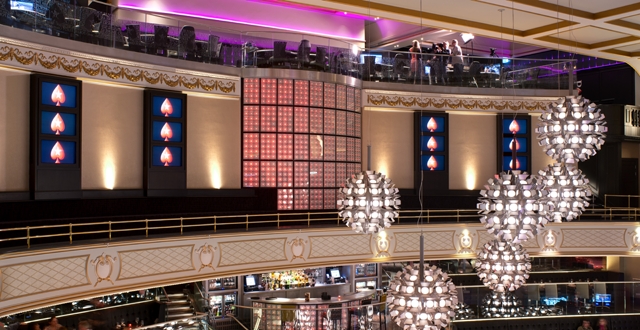 MKV Design, internationally respected for its award-winning hotel design, has ventured into new territory by translating the virtual into reality for the gaming website, PokerStars. The team has imaginatively interpreted this interactive, online poker room into the glamorous PokerStars LIVE which recently debuted in London’s Hippodrome Casino. The design team’s brief was to create the brand’s first-ever physical space, one that would embody its online presence so that it would be recognisable to website players. MKV took this idea a step further by creating a refined, pared-back ambience with a modern, tech-savvy style.

The poker gallery is situated on a mezzanine overlooking the Hippodrome’s ground-floor gaming areas four storeys below. The casino is housed within an iconic, listed building created by renowned theatre architect Frank Matcham.

It was essential that MKV’s design was sympathetic to the historical aspects of the original 1900 structure, including the stepped, open-gallery spaces which remind visitors of the site’s legendary provenance.

The casino remained in operation round-the-clock, seven days a week, which impacted the scope of design possibilities since works could not affect the gaming areas below.

Colour and light psychology were an important consideration in the interior design. A muted palette of dark greys enables players to focus better upon the table, their hands and the card action taking place. Gaming tables were custom-upholstered with silver-toned baize, and carpeting reminiscent of flannel tweed helps create a more sophisticated feel. Along the back wall, a grid composed of angled “fins” formed from sturdy, charcoal painted metal is backlit by a wall-to-wall, internally illuminated box-fitted with LEDs.  The glowing, ethereal light which emanates from the wall helps create a subtle allusion to the idea of the digital network of PokerStars’ virtual world. Shifts in colour from yellow to red to blue have been programmed to cycle over the course of an hour, but can also be precisely timed by the operations team to create a variety of moods. Soft illumination from the ceiling soffit overhead is synchronised to adjust with that of the accent wall.

Another specification of the brief was that the use of the words “PokerStars” would be closely regulated. Therefore, MKV chose to weave associations with the brand’s livery into the design to reinforce the brand identity. Existing chairs have been re-upholstered with black leather subtly highlighted by the PokerStars emblem stitched into their backs with silver thread. This tone-on-tone effect, versus high-contrast embroidery, helps set the refined, urbane atmosphere envisioned by MKV.