Reinvention of the Kempinski Hotel Corvinus 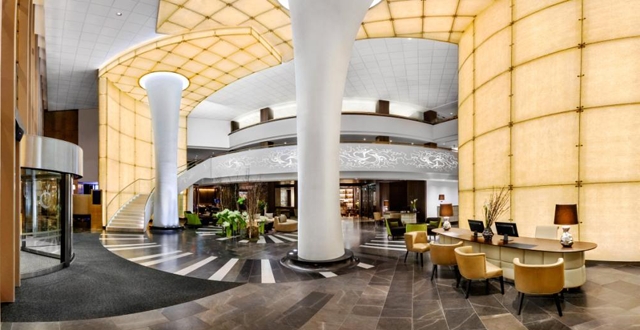 The public areas of the Kempinski Hotel Corvinus Budapest have undergone a remarkable transformation by MKV Design, the hotel’s first major refurbishment since it first opened in 1992. Designed originally by the renowned Hungarian architect, Mr Jozsef Finta, and named after the Renaissance King Matthias Corvinus who established Budapest as a European centre of art and culture, it was the first internationally branded hotel to be established in the city after the collapse of the Soviet Bloc and a significant symbol of Budapest’s re-emergence on the European stage.

MKV Design’s courageous vision for the public areas firmly places the hotel in the present, enhancing the dramatic scale of the interior yet also creating a sequence of unique spaces that are inviting and exciting for overseas guests and local people alike.

The lobby with its soaring nine metre volume up to a glazed roof has become a glowing expanse that amplifies its scale and harmonises the existing shapes and levels. Its light now shines beguilingly through the glazed front façade, and the space flows from the main porte cochčre to reception, offering views through the café and restaurant to the second entrance on the opposite side of the building.

Key to the designers’ re-planning of the lobby was the replacement of the staircase leading up to the first floor function and meeting rooms. A modern interpretation of the conventional grand staircase is now one of the first elements that greets guests upon arrival, a magnificent staircase which curves around the edge of the lobby and is as much a work of art as functional stairway. Constructed in an elegant brown stone against a glazed-over Crystalux wall, its decorative and perforated metal balustrade, reminiscent of the Art Nouveau styling for which Budapest is famed, sweeps up and wraps around the first floor where it looks over the lobby atrium.

MKV has captured space for a ground floor bar with its own street entrance. Blue Fox The Bar is intimate and clubby in ambience with its dark walnut timber floor and tables together with richly toned upholstery to the seating. Lighting is low and discreet, supplemented by the play of reflections from mirrored nooks and columns. The deep glow of the cobalt blue acrylic bar surround, inset with mesh and suggestive of a soda siphon, completes the sophisticated vibe of the space.

Located within the central atrium, The Living Room is a modern interpretation of Budapest’s traditional coffee house culture. This is a deeply comfortable area and a quiet contrast to the theatricality of the lobby, where guests are invited to take time out of their day to sink into comfortable sofas or high-back armchairs, read books and relax near the fire.

The restaurant, re-named ÉS Bisztró, is where the designers’ concept taps into the international trend for creating a dining experience that hints of locale and tradition yet is firmly rooted in a modern context. It is both farmhouse kitchen and stylish urban restaurant.

The Promenade is another striking intervention by MKV Design. What was previously only a circulation space is now reinvented as a destination in its own right, a chic and welcoming lounge where guests will go to see and be seen.