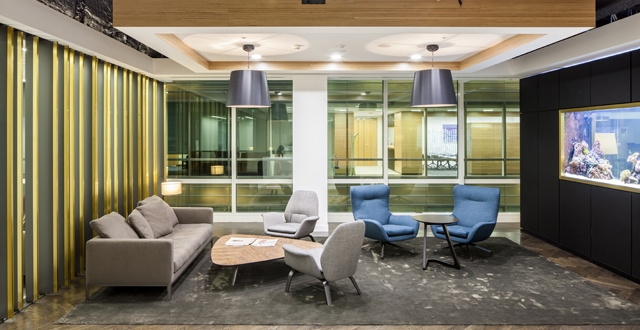 EDGE was commissioned to create a new working environment for the Mako Group that would express the company’s particular ethos, approach, values and aspirations; future-proof it in terms of additional growth; instil employee pride and provide a sense of unity for its ‘family of personalities’. The Mako Group is a forward-thinking and highly-independent global financial group, made up of five individual businesses, each of which specialises in a different aspect of sales, trading and investment management activities.

Although all five businesses that make up the Group had previously been housed under one roof, the former workspace had been split over different levels and organised in a slightly disjointed way (as the Group had expanded fairly rapidly). The former offices also lacked adequate facilities for the proper welcome and entertainment of clients. The Mako Group therefore commissioned EDGE to create a dynamic new workspace to house all five companies successfully within a single storey, 22,000 sq ft office space, located on the second floor of a newly re-purposed office block, just behind Liverpool Street station. The space wraps around two and half sides of a central building atrium, making for a very well-lit space, with additional natural light entering from two external-facing walls.

“The new workspace was to have a sharp, cutting-edge and boutique feel, with proper social spaces for evening relaxation and events” commented EDGE MD Racheal Cadey. “Because of regulatory requirements, there had to be both Chinese walls and even separate entrances and receptions for some of the Group’s constituent parts, but all the companies now benefit from the scheme’s endless layers and reveals, cleverly suggesting a bigger company at all times and allowing the smaller elements of the Group to benefit from the overall office size.” EDGE’s ‘Big Idea’ for the space was ‘Collegial Empowerment’: the creation of a unique and non-stereotypical space that would be vibrant, energetic, entrepreneurial and collaborative and which would emphasise a sense of unity for all members of the group. Whilst there are several discrete desking areas for the companies whose working environments need to be self-contained, the office facilities (which include bar, kitchens and teapoints; meeting rooms; library; relaxed seating areas, gym, treatment and locker rooms) punctuate the space and create links between the desking areas, with a main overall reception lobby and waiting space creating a high-impact welcome for visitors.

Two of the project’s stand-out design features are immediately visible on arrival. First, the reception back wall, which was inspired by shark’s fins and is made up of protruding brass strips of varying depths, inset with the information that would normally come in on trader ticker tape – ie trader and stock names, value and date. As real trading information could not be used here, the information instead celebrates the names of the design team – both from EDGE and from other consultants on the project (including ChapmanBDSP, Bigham Anderson Partnership and Jones Lang LaSalle), along with the project start and completion dates, so that on closer inspection, the wall becomes a record of the project and a celebration of its completion, as well as a playful nod to the Group brand name. The second major feature is a series of three huge-scale fish tanks. Two of these book-end the client drop-in area immediately beyond reception, whilst the third is located at the end of one of the main board room meeting spaces. The Mako Group also had fish tanks in its previous offices, but the new tanks (two seawater and one freshwater) are larger in scale in these new premises and were developed especially for the project by Aquarium Architecture.

The reception also features a bespoke Corian desk, inspired by the streamlined shape of a shark and with the Mako Group logo inset into concrete at the front. This space, with a generous seating area, then leads into the client drop-in zone, with the two fish tanks directly aligned at each end, facing one another and creating a degree of separation from the reception area behind and desking space beyond.

“Pacing was a very important in the space-plan”, commented Racheal Cadey. “The reception area provides the instant ‘wow factor’ and immediately establishes the company as specialists in the marketplace. It’s a place to see and be seen. From thereon in, visitors see a series of inviting spaces, from the client lounge for break-out and drop-in use, to a series of intricately-designed and detailed meeting spaces, to the main café and collaboration zone. The offices then open out into open plan desking in an area flooded with daylight, with a central collaborative spine continuing through this space. The pace then increases further in the more densely-packed trading area, where people need to feed directly off each other’s energy, culminating in the gym and fitness areas at the far end.” Opposite the client drop-in area is a quiet space: a comfortable, semi-closed-off library room with clear vistas into the drop-in area, which houses the CEO’s book collection and which can also double up as an informal meeting space. The library is followed by two meeting rooms. The scheme has a total of ten meeting rooms – three board rooms and seven smaller meeting spaces. This large number of closed spaces represents the need for client confidentiality and the discreet nature of the business.

Each room is named after a particular shark and has a manifestation in tones of the blue of the brand on the outside, with the shark’s name at the edge.

“The rooms are also clad in central horizontal plexwood strips, with glazing around all the edges, so that sightlines in and out are maintained and carry on a theme of ‘framing’ that has been applied throughout, where glimpsing activity in other zones is a constant. We wanted to create a feeling of invitation to the next space at all times”, commented Project Leader (and EDGE Associate Director) Douglas Saunders.

Beyond the meeting rooms is the bar area: a central feature hub based around a high bar with a concrete base, Dupont Zodiax top and plexwood edge detailing, illuminated by a row of pendant lights (from Swedish manufacturer Lucky Lampa). The bar, with Seville bar stools from Morgan, is for use for in-house drinks and special events. Directly opposite the bar is a relaxed area with high tables and bespoke banquette seating, to be used by staff for time out or informal meetings. “Another important part of the brief, “ added Douglas Saunders, “was a desire on the part of the owner and CEO to ‘pay back’ to staff for their loyalty and hard work in the new offices, in the form of great additional facilities, as with this area and other break-out spaces and all gym and kitchen facilities.” The furniture in the scheme has a boutique hotel feel, with the corporate colours of blue and grey applied to semi-bespoke editions of existing pieces in new fabrics with occasional piped edges, whilst a domestic feel comes from the scale of the furniture and the dark, herringbone flooring. The furniture is mostly British, from Morgan Furniture and James UK, augmented with some stand-out pieces from Minotti and B&B Italia. Alongside the blue and grey fabrics, yellow is used throughout the scheme as a highlight colour, chosen for its vibrancy and energy. Joinery throughout is bespoke – around the tanks, bar, teapoints, reception desk and meeting rooms – and was a joint creation between EDGE and joinery experts Thorpes.

In the first open-plan desking area, a further row of pendant lights (Josiah lights with hand-made ceramic shades) forms another strong feature above a collaborative ‘spine’ area. Teapoints and kitchen prep areas are at each end of the space. In the far corner is the CEO’s office, with two external walls and clear views through the open plan space. The gym, locker room and treatment room lie at the far end of the open-plan space, wrapped around the far side of the central atrium.

A further set of cellular and open-plan spaces also leads off the main reception in the opposite direction to the fish tanks, for one of the group members that needed its own discrete area (and also features a separate entrance when needed). The theme of collaboration continues here via the use of the American Diner Parcs bench and table from Bene.