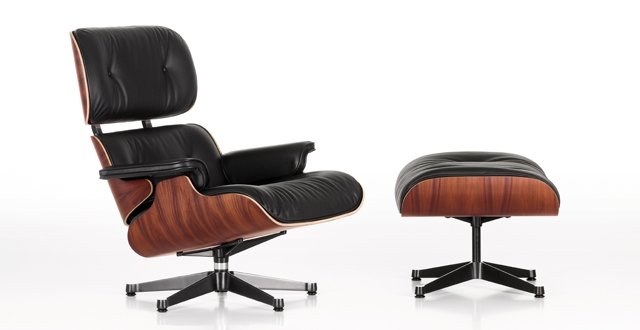 Vitra has announced its partnership with Barbican Art Gallery, London, UK, for the new exhibition ‘The World of Charles and Ray Eames’, running from 21 October 2015 to 14 February 2016. As the exhibition’s official furniture partner, as well as the sole authorised manufacturer of Charles and Ray Eames’ designs for Europe and the Middle East, Vitra has supplied a handpicked selection of the Eames’ most iconic, 20th Century furniture and home accessories for the exhibition (Art Gallery Level 3) and Martini Bar (Level 1). These range from the Eames Plastic Side Chairs in a variety of colour options (1950), to the Organic Chair (1940)*, Elliptical Tables (1951) and the Eames Tandem Seating (1962). The Vitra furniture will be on display and experienced by visitors to the exhibition until 14 February 2016.

The furniture items that have long since been considered classics show in exemplary fashion the symbiosis of aesthetics, quality and economic which the Eames aspired to achieve in everything they designed. In total, over 40 of their highly flexible and diverse furniture systems for offices, private residences and public institutions went into production.

The World of Charles and Ray Eames
‘The World of Charles and Ray Eames’ is a major new exhibition surveying the careers of Charles (1907 – 1978) and Ray (1912 – 1988) Eames and the extraordinary work of the Eames Office: a ‘laboratory’, active for over four decades, where the Eames and their collaborators and staff produced an array of pioneering and influential work – from architecture, furniture, graphic and product design, to painting, drawing, film, sculpture, photography, multi-media installation and exhibitions, as well as new models for education.

Bringing together over 380 works, the exhibition presents the world of Charles and Ray Eames through objects and projects produced during their lifetime, offering an opportunity to re- examine their work and legacy, and the legacy of post-war modernism. It also features a wealth of documentation and contextual material from the professional archive of the Eames Office as well as artefacts from their personal collections. Alongside a rich array of the Eames designs, the exhibition includes material which highlights the importance of these relationships to the Eames’ life, philosophy and working processes.

Structured thematically, the exhibition presents a complex portrait of these internationally celebrated designers in the context of the inner world of their Office and network, alongside the political, cultural and social conditions which enabled and influenced their work.